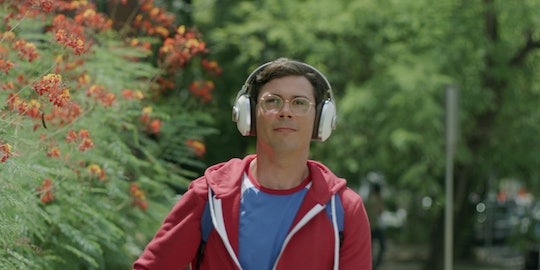 Netflix has become synonymous with fire originals and one of the newest in their collection, Special, is no different. Series creator and executive producer Ryan O'Connell (alongside The Big Bang Theory's Jim Parsons), tells the story of a gay man with cerebral palsy determined to take control of his life. The show is based on his memoir, I'm Special and Other Lies We Tell Ourselves. With such a fresh new take on identity you may be wondering who plays Ryan on Special.

Interestingly, O'Connell plays himself in the leading role in Special, and it's refreshing and authentic as hell to see someone portrayed on TV who actually lives the life off-screen. Although it may be a small thing to some, having accurate representation in the media is so important. In an interview with Vulture, O'Connell said he got his start writing blogs for Thought Catalog at 24-years-old, which led to a book deal and now this series. In Special, Ryan is a gay man with cerebral palsy who, after "years of dead-end internships, working in his pajamas as a blogger and communicating mostly via text, Ryan eventually figured out how to take his life from bleak to chic and began limping towards adulthood," according to the Netflix description.

In terms of the story behind Special, O'Connell, who grew up in Ventura, California (and describes it to Vulture as "Laguna Beach but with a little bit of meth"), was hit by a car, then spent years pretending he wasn't disabled — instead blaming his disability on the accident. It wasn't until that 2015 memoir did the truth come out and the rest, as they say, is history. If you're looking for more info on O'Connell, he's all over social media. As a former writer for MTV's Awkward, with additional writing credits in Will & Grace and the 90210 reboot, he has a lot to say. His humor and likability comes through in everything he says and does. For instance, his Twitter account is full of LOL-worthy Tweets such as this:

If Instagram is more your game, he's over there too, with an appropriate bio reading, "Writer, whatever." If you scroll down his wall of photos, you'll see O'Connell with friends, and family, and his boyfriend of four years, Jonathan Parks-Ramage, who is also a writer. Um, cute much? And, of course, there's a lot of Special content in the mix, because, obviously. But, despite a serious online presence, O'Connell is still humble. The show also stars Jessica Hecht (who plays Ryan’s mom, Karen), Marla Mindelle (who plays his boss, Olivia), and Punam Patel (who plays his work BFF, Kim).

In an interview with Time, O'Connell said of the show he wasn't trying to fill any kind of void — he's just telling his story. "I’m excited that people are saying, ‘I’ve never seen this before', but part of me is also like, Why? We should have seen this 40 million years ago." In terms of the content in the show, he took pages from experiences — however candid — and things he's been blogging about for over a decade. "I’m addicted to being honest," he added. "It’s a compulsion."

Now that you've properly studied up on all things Ryan O'Connell, mark your calendar for Special, buy the memoir, and support this incredible show.