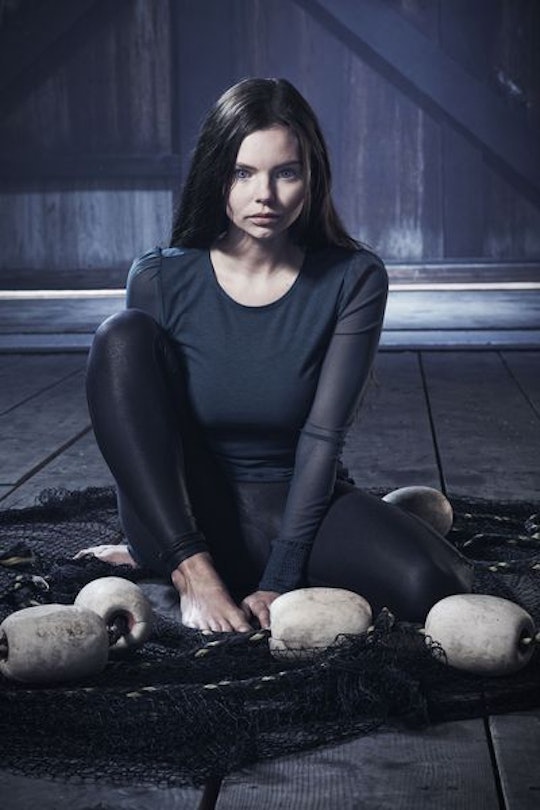 Ryn On 'Siren' Is Not Your Average Mermaid

If you love mermaids or under the sea tales in general, you'll love Freeform's newest series, Siren. The show takes place in the coastal town of Bristol Cove, once known to be the town of mermaids. Most people believe mermaids are a thing of legend, but when Ryn, a mysterious girl, comes into town, she brings into question the truth about the mermaids in Bristol Cove. With Ryn at the center of the series, it's no surprise that some people are wondering: who plays Ryn on Siren? English actress Eline Powell got the role and will be portraying the fishy character. (Sorry, I just couldn't help myself.)

Although this is Powell's first starring role on a TV series, you may recognize her from some of the other work she's done in the past. For instance, believe it or not, this isn't her first time playing a sea creature. In King Arthur: Legend of the Sword, she was one of the sirens, or "syrens" as it was spelled in the film, who Arthur had to tangle with. Additionally, she also had a two-episode role as Bianca in Game of Thrones. If you don't recall, Bianca was one of the actresses in that awful play Arya saw in Braavos. She was also the one who hired the Faceless Men to kill Lady Crane.

Prior to her role on Game of Thrones, Powell also starred in the film, Anita B., as the titular character. Additionally, Powell appeared in the films Quartet, Private Peaceful, Stoner Express, and Novitiate.

When she's not busy killing it onscreen, Powell is living her best life by traveling, spending time with her family, friends, dog, and her boyfriend. Based on her Instagram, some activities she enjoys are reading, kayaking, and scuba diving. She's also very supportive of green initiatives, specifically ridding the world of plastic.

While Powell seems like a fun person to hang out with, the same can't really be said for her character, Ryn. Based on the trailers and sneak peeks from the series, it's clear that Ryn is a mermaid but she's nothing like Disney's Ariel in any way. Instead, she's much darker, and appears to be more like a siren that lures men to their deaths. She also has these extremely long teeth that may give you nightmares if you stare at them for too long.

That being said, perhaps there's more to Ryn than just her sea monster characteristics. It's unclear right now what has led her to Bristol Cove and why she decided to become a fish out of water. Is she really just there to wreck havoc on the humans in town or is there something specific she's after? Perhaps Ryn just needs some help, or a friend, and once she has that she'll actually turn out to be not so scary. Or maybe she's really there to just kill everyone. Who knows?

Along with Powell, Siren also stars Alex Roe as Ben, the man who discovers Ryn on the street; Ian Verdun as Xander; Rena Owen as Helen, the resident mermaid expert; Fola Evans-Akingbola as Maddie, Ben's friend and possible love interest; and Sibongile Mlambo as Donna, another mermaid and presumably Ryn's friend.

You can learn more about Ryn and the rest of the characters as well as what's going in Bristol Cove when Siren's two-hour premiere airs on Thursday, March 29 beginning at 8 p.m. EST on Freeform. Trust me, this is a new series you won't want to miss.