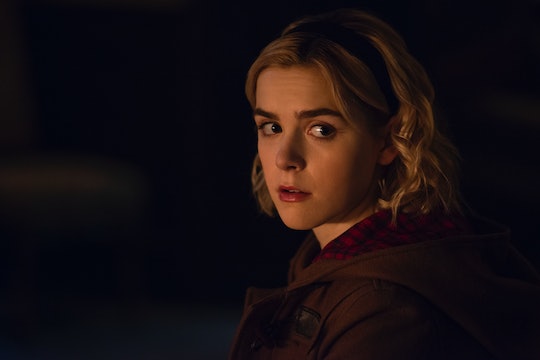 Chilling Adventures of Sabrina fans are getting a holiday treat this winter. The show is briefly returning from hiatus on Dec. 14 with A Midwinter’s Tale, an episode that will reunite Sabrina with her mother. Fans have only seen her sporadically through the first half of the season, so they’re curious to know, who plays Sabrina’s mom on Chilling Adventures of Sabrina?

Canadian actress Annette Reilly plays the part of Sabrina’s mother, Diana Spellman. Reilly has been featured in a number of short films over the years, and had a small part in one episode of the X-Files, but Chilling Adventures of Sabrina is her first recurring TV role. In an interview with Instinct Culture, Reilly revealed that there was a lot of secrecy surrounding the role when she first auditioned, and when she finally landed the part, she wasn’t really sure that it was for Sabrina’s mom.

But when the show started filming, Reilly said that she began to feel a building sense of excitement around the series. “As we started filming, it became clear that this was much bigger than I had originally anticipated,” Reilly told the outlet. “I’ve been trying to reign in my excitement since day one, because anything can happen in this biz, but overall my reaction has just been pure joy at being involved in this show.”

So where has Sabrina’s mom been all this time? Well, her backstory in the series (and the comics) is that Diana is a human who falls in love with a powerful warlock named Edward Spellman (Sabrina’s father). But soon after getting married and giving birth to their half-witch-half-human daughter Sabrina, the couple ends up dead. Sabrina has always believed that her parents died in an airplane crash, but after hearing some disturbing rumors from the Weird Sisters, she is beginning to think that there is something she doesn’t know about their death.

In an interview with Entertainment Tonight, Chilling Adventures of Sabrina creator and showrunner Roberto Aguirre-Sacasa revealed that the midwinter episode will dive into Sabrina’s strained relationships with her friends and family, but will also reveal a few clues about Diana. “We see a little bit more of the aftermath of Harvey and Sabrina, their breakup at the end of part one, we see how Sabrina’s relating to her mortal friends,” said Aguirre-Sacasa. “We pick up a couple of threads about Sabrina and her mom, who’s trapped in limbo, so there’s definitely tendrils of narrative that we continued.”

Aguirre-Sacasa told ET that the new episode is holiday-centric. While the humans in Greendale are celebrating Christmas, the witches are similarly celebrating a pagan holiday called Winter Solstice. He explained that fans will get to see the Spellmans take part in some of the most important witch holiday traditions, including the burning of the yule log which keeps “nasty things” from crawling down the chimney.

But there is one Christmas tradition that will prompt Sabrina to reach out to her dead mother. “Christmastime is traditionally a big time for ghost stories and ghost visitations, A Christmas Carol being the best example of that,” Aguirre-Sacasa revealed in his ET interview. “So Sabrina gets it into her head that she’s going to have a seance to contact her mother.”

With Sabrina’s growing curiosity and drive to meet her mother, it’s safe to say that fans will be seeing more of Reilly in the upcoming episodes. Chilling Adventures of Sabrina: A Midwinter’s Tale premieres on Dec. 14 on Netflix.