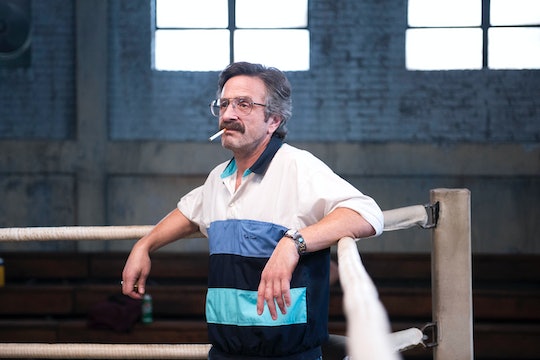 Sam Sylvia Is Going To Bring The Funny To 'GLOW'

Alison Brie might be the star of GLOW, but another important player throughout the show is Sam Sylvia, the director of the female wrestlers. Or, excuse me, the Gorgeous Ladies Of Wrestling. So who plays Sam Sylvia on GLOW? His name is Marc Maron and he's definitely no stranger to the realm of comedy.

The actor's IFC series Maron just ended after four seasons and he recently had a small role in the movie Mike and Dave Need Wedding Dates. He’s also appeared as himself on Louie and has been on HBO’s Girls, so taking on the role of Sam on GLOW, another comedy, made perfect sense for him. Maron also has an ongoing podcast, WTF with Marc Maron, which according to Deadline, averages in at 6.5 million downloads each month and almost 300 million downloads since the podcast began. Not too shabby.

But since Maron has one of those recognizable faces and even voices, it’s to be expected that fans would ask who plays Sam on GLOW. In the show, he’s a divorced failed Hollywood director who’s now trying to direct more than a dozen women into their new roles of wrestling entertainers. But in real life, Maron has found a lot of success over the years.

Maron’s former IFC comedy — which he not only starred in but also wrote, produced, and directed — was nominated for a Writer’s Guild Award in 2016, but the comic decided now was the best time to call it quits. According to Maron on his podcast, it was the way he wanted to go out, even if he could have given the show more time. "This is it," Maron said in one of his episodes. "It’s done. There’s ways to do more, but this is the vision. This season was the season. And I couldn’t be more thrilled about how it came out."

He went on to say that even if IFC executives want another season or two, that’s not his plan. "I imagine maybe IFC would want to do more," he said. "I don’t know, they haven’t said anything to that end… But I don’t want to do it anymore. I’m sure they’d be thrilled to do more... I had great writers, great line producers, directors, lighting guys, set guys… IFC gave us a lot of creative freedom.”

Luckily though, ending Maron means that the experienced actor and comedian is freer than ever to play Sam on GLOW and hopefully bring some heart to the character.