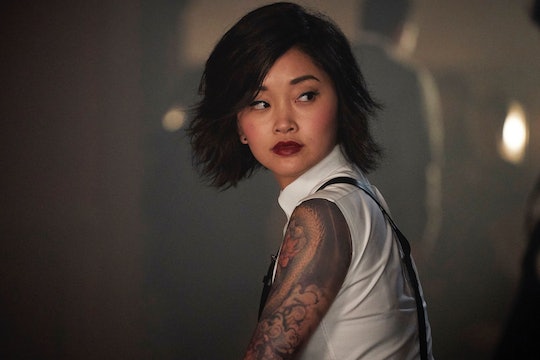 Syfy's latest graphic novel adaptation tackles Deadly Class, a period coming-of-age tale that follows a special school for misfits in 1987 San Francisco. While it brings a few familiar faces to the screen, perhaps none are as recognizable as the actress who plays Saya Kuroki on Deadly Class. Lana Condor is, of course, the leading lady of To All The Boys I've Loved Before, Netflix's hit teen rom-com of the summer, which is being expanded into a trilogy to follow the Jenny Han novels on which it's based. Suffice to say, her Deadly Class role is super different from the film where we all came to know and love her.

"I’m really excited for people to see this side of me," Condor said in an interview with Vox. "People will be saying, ‘Lara Jean [her character in To All the Boys] snapped,’ ‘Lara Jean has gone crazy.’ But you know what, I think this is the fun and the intrigue of acting."

The Vietnamise-born actress made her debut in X-Men: Apocalypse (so she's no stranger to action or sci-fi), but she didn't really become a household name until last year. She already has four films slated for release in 2019, including the To All The Boys sequel, so the 21-year-old actress is definitely making the most out of her newfound stardom.

In an interview with Entertainment Weekly, Condor explained that X-Men actually prepared her a great deal for her role on Deadly Class. "I just had that knowledge of what it’s like to work on a project that already has a pre-existing source material and a fan base," she said. "Because of X-Men, I was able to understand [that] because the fans are the most important part I have to be true to this character, [and] we have to be true to this story as much as possible because that really makes a difference to the fans."

As for what makes Deadly Class such a whiplash-inducing turn for her, to call it gritty would be an understatement. Vox calls it "like Harry Potter with prison gangs and the Yakuza," which somehow still downplays its brutality. The show also stars Benedict Wong, who viewers might recognize as the imposing Kublai Khan from the short-lived Netflix series Marco Polo. He also had a role in last year's Avengers: Infinity War, where he worked with directors Anthony and Joe Russo, who executive produce Deadly Class.

The Russo brothers have a fair share of comics adaptations under their belt, too, in addition to Avengers: Infinity War. Besides its sequel Avengers: Endgame, slated to come out this year, they've also directed Captain America: The Winter Soldier and Captain America: Civil War together. Avengers: Infinity War, of course, became the first superhero film ever to gross more than $2 billion worldwide, so the Russo Brothers are more than qualified to take on a TV adaptation. The graphic novel on which the series is based came out in 2014, and was written by Rick Remender and Wes Craig. Remender serves as the series showrunner and is also an executive producer alongside the Russo brothers.