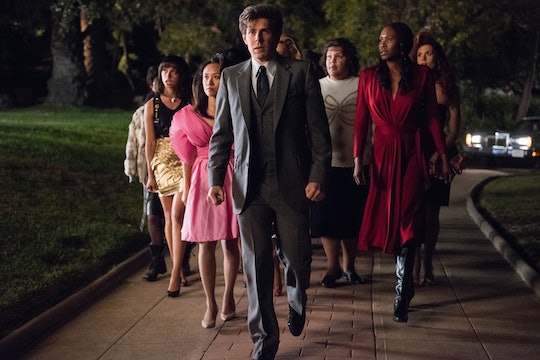 This 'GLOW' Character Has An Impressive Resume

Netflix’s newest original series GLOW is about women of wrestling and each of their individual stories. But even so, there are still some men mixed in there to play big roles within the storyline. Like Sebastian, who is the wrestling-obsessed rich guy who comes up with the idea for GLOW in the first place. And since he’s such an integral character on the series, viewers will probably be asking who plays Sebastian "Bash" Howard on GLOW.

Chris Lowell is currently busy working on the Epix series Graves, but that doesn’t mean he doesn’t also have time to be a regular on GLOW. And overall, the actor has an impressive resume of work from the past 10 years. You might recognize him as Dell from Private Practice, but even before that, he was a series regular on the likes of Veronica Mars. More recently, Lowell was in The Help and has the title role in Graves currently, so clearly hard work isn’t something the actor shies away from.

According to his Twitter account, Lowell is also a photographer in addition to playing roles like Sebastian on GLOW. His photos, most of which are unafraid of nudity, seem to celebrate the human form and have even been shown in galleries in Los Angeles. And, according to Lowell’s website, some of his work is featured in the Elton John Collection.

In addition to acting and photography, Lowell is also a filmmaker. In 2014, Beside Still Waters was his directorial debut and was released at the Tribeca Film Festival. Right now, Lowell is in pre-production for his next film, Lovers.

Lowell is also currently dating actress Kerry Bishé (Argo, Halt and Catch Fire) and the two live together in New York where they bought a triplex in 2016. They’re clearly not all about publicity as a couple, but judging by the random photos of each other throughout their respective Instagram accounts, it’s safe to say that they’re very happy together.

Although most fans probably know Lowell from his acting work, there are so many other things going on in his life on top of his work in movies and on TV shows. Sebastian on GLOW might not be one of the most important characters (i.e., not one of the 14 amazing women wrestlers), but he plays an prominent role in the series overall. And Lowell has definitely proven himself more than capable of bringing the character to life.