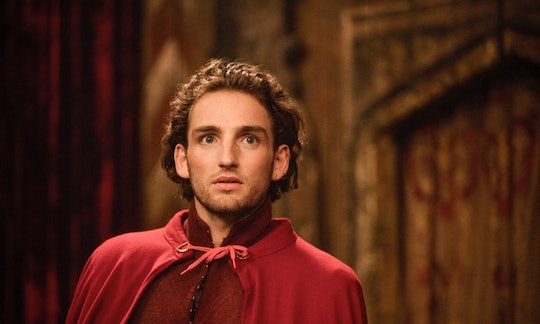 Get Ready To Fall In Love With 'Will's Shakespeare

TNT's new historical drama Will asks viewers to imagine William Shakespeare's life before he was The Bard; just your average small-town genius who went by Will. And the man who plays him is just as brand new to the scene. So who plays Shakespeare on Will? Laurie Davidson is a TV newbie ready to make his mark on your silver screen.

The first thing you'll notice about Laurie Davidson's IMDB page is that it is very short. That's because Davidson has never acted in anything outside of school before. He was still enrolled in the London Academy of Music and Dramatic Art (LAMDA) when he was basically plucked from obscurity for this role. He was interviewing for another film when the casting director told him about the part, and he knew he just had to get it. In an interview with Vulture, Davidson said:

Anyway, six auditions later, I met Shekhar [Kapur, executive producer/director] and Craig [Pearce] and they were absolutely lovely...And then finally, I was at drama school at the time, still at LAMDA, and was just about to do a production of Fiddler on the Roof where I would be playing Tevye. I then found out that I’d got the part, and I had to leave LAMDA.

At the time of Shakespeare's life in which Will is set, Will is still an obscure young playwright and poet who nobody knows or cares about. He's trying to make a name for himself in an already well-established theater scene that the show tries very hard to depict as punk rock. This is not the stuffy, academic Shakespeare you may have been bored by in high school. This is Shakespeare as the David Bowie of the era, complete with punk piercings, face paint, and mosh pits. Yes, mosh pits. In an interview with Entertainment Weekly Davidson stated that, "Walking down Shoreditch, London in 1589 would’ve been like walking down the street in Camden, London with posters of bands with an eclectic mix of people with piercings."

This sort of accessible, intentionally anachronistic historical dramas have, of course, been done before. Notable examples include Moulin Rouge and Romeo + Juliet, which Pearce worked on with legendary over-the-top director Baz Luhrmann, as well as Sofia Coppola's Marie Antoinette. The show will probably not resemble that other famous Shakespeare character played by Joseph Fiennes in Shakespeare in Love, however. In the EW interview Davidson added that, "So little is actually known about him that, for me, to watch someone else’s dramatization wouldn’t have been useful in any way."

Who knows how well this show will perform, but hopefully it's the vehicle that will raise Davidson from obscurity, just like the character he plays.