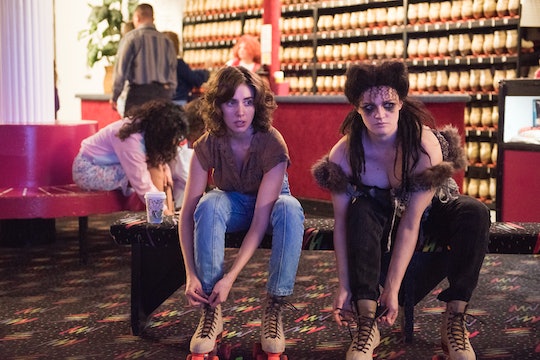 Sheila From 'GLOW' Got Her Start In Theater

Since the women of GLOW all have different backstories and pasts, it’s really no wonder that the actresses who play them are equally as diverse, even if acting is the one common thread among them — just like with the actress who plays Sheila on GLOW. Gayle Rankin might be an easy favorite on the new Netflix series, but the trained performer got her start in theater and was even on Broadway, so she already has a lot of experience under her belt.

According to DazedDigital.com, Rankin was the first ever Scottish Juilliard student and even though she moved to the United States at the age of 17 to pursue her acting dreams, her home country still holds a special place in her heart. "I spent the first 16 years of my life in Scotland. My whole family is there. It’s in my blood and informs my sense of humour, my point of view, the people I choose to spend time with, everything," she told the site. "There is magic in Scotland. It’s country with a lot of pride and bravery. I feel lucky to have been born into that."

And even though she plays Sheila on GLOW, Rankin is still taking roles on-stage, which is obviously where her passion lies. From June 20 - Sept. 3, Rankin will be playing Ophelia in The Public Theater’s production of Hamlet along with Golden Globe winner Oscar Isaac and Keegan Michael Key.

Over the past several years, Rankin has been in several short films, but in 2018 she’s set to appear in the Emma Roberts movie In A Relationship. But in a 2016 interview with Interview magazine, it was like Rankin was inadvertently telling her own future.

When asked what her dream role would be, she all but described her newest role as Sheila on GLOW. "I've been thinking about this a lot lately," Rankin said. "If you put me in a box, I'm a character actor. The thing that keeps popping up for me — it sounds really cliché — but I want to play something really physically challenging, something extremely demanding and strong." Can she predict my future next please?

It looks like Rankin definitely got her dream role out of playing a wrestling performer on GLOW, but the fact that she’s still accepting roles in the theater shows where her heart has always been.