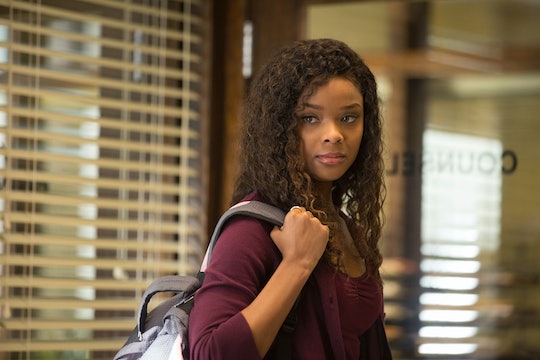 Sheri On '13 Reasons Why' Is From 'Empire' Fame

(Warning: minor spoilers from Episode 8 ahead!) 13 Reasons Why, which is based on the bestselling novel by Jay Asher of the same name, follows Clay Jensen as he discovers through tapes the 13 people who contributed to Hannah's decision to end her life. One of those people is Sheri, a popular cheerleader who had a brief friendship with Hannah. So who plays Sheri on 13 Reasons Why? Ajiona Alexus got the role and she's pretty much the perfect fit, though don't be surprised is she looks really familiar to you.

If you're a fan of the FOX drama Empire you may recognize Alexus. She's played the teenage version of Cookie in several episodes. However, Alexus has also appeared in a number of other shows and films. Most notably she played DeAnna on The Rickey Smiley Show, which also starred Ray J. She's also appeared in episodes of Grey's Anatomy and Code Black. You may have also seen Alexus on the big screen in Unspoken Words, Bad Girl, and Something Like Summer. Additionally, she's set to appear in the upcoming films Sons 2 the Grave and Acrimony.

If you read the novel, you're probably a little confused and wondering who the heck Sheri is. That's because her name in the book was changed for the show, though it's unclear why. In the novel, the character's name was Jenny, and though her name was changed, the reason why she's on the tapes hasn't. She also clearly has a big crush on Clay, which became evident during their little study/make out session in his room.

Just like almost everyone else that made Hannah's list, Sheri's actions may seem small or like a simple mistake, however when combined with everything else Hannah went through, it's easy to see why Sheri's choices also left it's mark on Hannah. Because Clay has the tapes, he now knows that he's also on them, though he's not exactly sure why. Along with Clay and Sheri, the others that are on the tapes also had to listen to all of them and then pass the tapes along to the next person. If they failed to do so, Hannah made sure that someone else had a copy of the tapes and that they would release them if everyone didn't do as she instructed.

With each episode viewers jump between the past and the present as Clay navigates life after Hannah's death and the fallout of what he discovers on her tapes. The show transitions smoothly between both Clay and Hannah's perspectives, as well as their classmates, parents, and teachers. But as for how Sheri fits into all of that — you'll just have to wait until her tape to find out.

You can stream 13 Reasons Why when it premieres on Netflix on Friday, March 31.