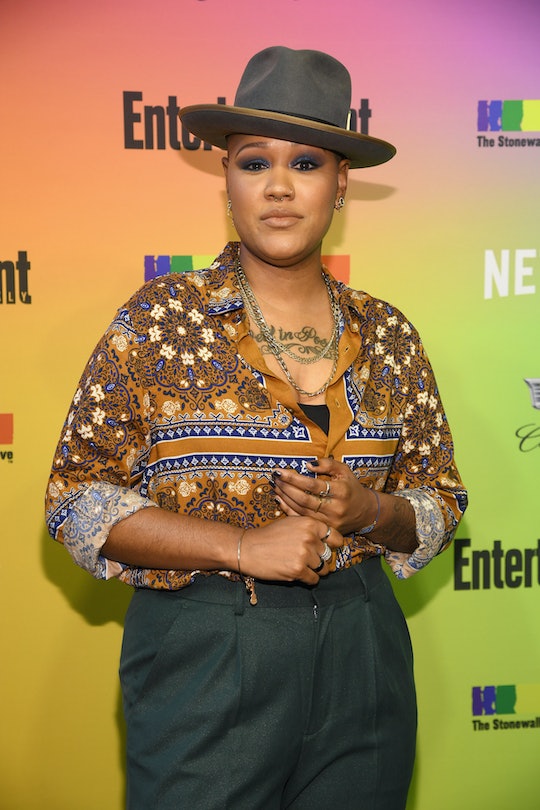 The Politician on Netflix is like a modern day amped up version of Election and if you watched all eight episodes in one sitting, then you can understand why. But The Politician probably wouldn't be as successful as it is so far without its cast and without Ryan Murphy behind it. And while Gwyneth Paltrow and Jessica Lange round out the star-studded cast, it's the newbies who fans are most interested in. Like the actress who plays Skye on The Politician, Rahne Jones.

If you found yourself wondering who she is as soon as you saw her in the dark comedy, you probably aren’t alone. But if you also found yourself wondering where you know her from, the answer is likely nowhere. Jones’ IMDb page has only one listing under her acting credits, which is The Politician, so it's safe to say that despite being a breakout star on the show, this is also Jones’ first big break in acting.

Although Jones is one of The Politician’s rising stars and is new to the game, I have a feeling the role will open plenty of doors for her moving forward. Let’s just hope she doesn't plan on going anywhere anytime soon in the next few seasons.

In a recent interview with Refinery 29, Jones revealed that before The Politician, her acting experience included a few small roles and some community theater work. Unlike some of the other stars, she did not spend years working on other projects before this one came along, but it was basically meant to be.

"I moved to New York just to see how [acting] would go,” she said. "And then I found theater and I loved it. It was a thing that I always wanted to do, but was too afraid to do. I went for it and then things just started to fall in line."

Before she made the move that would find her being cast in what is already a Netflix success, Jones actually worked for the Department of Homeland Security. I don't know if she knows some deep government secrets she’s going to take to the grave, but Jones was an inspector for the Department of Homeland Security’s Office of Inspector General. It's a far cry from a TV show set and it has been a big change for her.

Outside of acting, Jones keeps plenty busy with her personal life too. She recently got engaged to her girlfriend of three years and on Instagram, she is all about showing off how happy and adorable they are together. Judging by social media, it's hard to say what Jones’ fiance does, but she doesn't appear to be in the entertainment industry, so she definitely knew Jones well before millions of people started wondering about her as Skye on The Politician.

Jones is also close to her parents and while the fame thing is new for Jones, it’s equally as jarring for her parents, who, like Jones, were big fans of Murphy’s before she was cast in his newest Netflix series. In one photo on Jones’ Instagram, her mom looks absolutely starstruck to meet Billy Porter, who has become a fan favorite in the world of Murphy’s different cable network TV shows. So although Jones is new to show business and all of the connections it offers, she is definitely still grounded.

It’s not clear yet if The Politician will be back for a second season or if Jones will continue to be a part of it. After her debut in the acting world, though, I wouldn't be surprised if Murphy plans to use her for some of his future projects regardless.

The Politician is currently streaming on Netflix.

More Like This
10 Parenting Lessons We Learned From Red & Kitty In 'That '70s Show'
Exclusive: Watch How A Group Of Princesses Save The Day In Netflix's New Animated Series
The 20 Most Romantic Quotes From Friends
When Does 'Yellowstone' Season 5 Come To Peacock? Not Soon Enough
What Parents Are Talking About — Delivered Straight To Your Inbox