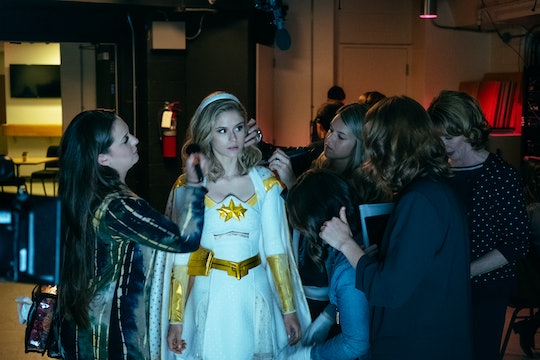 Amazon premiered The Boys, based on The New York Times best-selling comic by Garth Ennis and Darick Robertson, on July 26. In the show a "group of vigilantes set out to take down corrupt superheroes who abuse their superpowers." But one of these super humans stands out. You need to know who plays Starlight on The Boys. Erin Moriarty hasn't played a superhero before, but she's met a pretty kick-butt female superhero whose name you may recognize.

Moriarty got her start on the ABC soap opera One Life To Live, but she had a memorable role on Season 1 of Marvel's Jessica Jones. She played Hope Shlottman, a victim of Jessica's nemesis Kilgrave, who raped her and forced her to kill her parents.

Unfortunately, Moriarty's verson of a superhero might eventually have more in common with Kilgrave than with Jessica. Starlight/Annie January is the newest member of a group of famous super humans on The Boys called "The Seven." She's excited to do good for people at her new job until she's on the inside and finds that the group is totally corrupt. Only time will tell if fame changes Annie into an evil megalomaniac like her coworkers or if she will stay pure of heart.

Even if you're not a soap opera or Jessica Jones fan, you still may have seen Moriarty's face before. After Jessica Jones she played Claire in the Oscar-nominated film Captain Fantastic, and she's been all over TV on network shows like Law & Order: Special Victims Unit and ABC's Red Widow, where she played Natalie Walraven, daughter of main character Marta. She also doesn't shy away from material that has something to say about current events. In 2017, she starred in the FOX pilot Controversy about a high-profile sexual assault case that receives a lot of media attention. Unfortunately the pilot was ultimately not picked up to series.

But Moriarty doesn't let career setbacks get her down. On The Boys she relates most to Starlight's belief that being hopeful is not being the same as being naive. She told The Hollywood Reporter, "I kind of felt that way when I moved out to Hollywood and you know, you're hopeful," she said. "Like, you come out here and you really give it your all. And then you're kind of labelled with this naiveté."

The actress' Instagram reveals she's really busy on The Boys press tour right now, but obviously loving her job and her cast members. Starlight also loves her job making people's lives better with her powers and I hope she gets to continue with the same spirit. Regardless of her character's fate, Moriarty is excited for fans of the superhero genre to see the show because it pushes boundaries. She told Fab TV The Boys "kind of pushes the envelope and makes a commentary on the political status of our world and the entertainment industry." She also dropped a warning that fans will be surprised by the show, "and slightly traumatized but in the best way possible." OK, sure, whatever that means.

Amazon renewed The Boys for Season 2 ahead of the Season 1 premiere. The Seven must have some really special powers because that is a rare occurrence indeed.