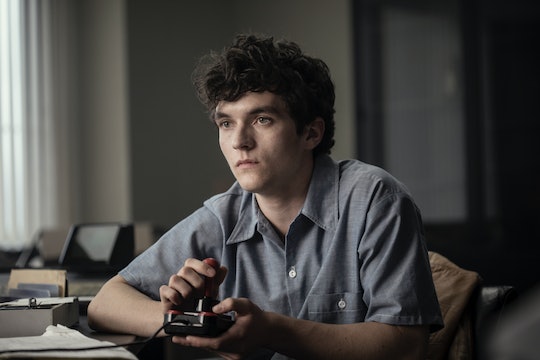 'Black Mirror: Bandersnatch' Stars An Actor You May Recognize From 'Dunkirk'

Black Mirror's latest installment, "Bandersnatch," allows viewers to control the actions of the protagonist, Stefan. If you've already watched (or more accurately, played) the interactive episode, you may be wondering about the actor behind the role. Who plays Stefan on Black Mirror's "Bandersnatch"?

Stefan is played by actor Fionn Whitehead, a 21-year-old actor from London, according to IMDb. He has only been professionally acting for a few years, but he's already had a few starring roles. Most people will probably recognize Whitehead as the protagonist Tommy in the 2017 Christopher Nolan film Dunkirk, which was his big break. Before Dunkirk, the only professional credit on Whitehead's resume was a role in a mini-series called Him. After Dunkirk, Whitehead went on to star in the 2017 movie The Children Act alongside Emma Thompson and Stanley Tucci. He also starred in an episode of the monologue-driven mini-series Queers, titled "A Grand Day Out."

Whitehead's career has been a bit of a whirlwind. "It's been pretty surreal, to be honest," the actor, whose name is pronounced like "fin," told The Hollywood Reporter in 2017 about working on Dunkirk. "I don't think it really sunk in until Chris [Nolan] was there, on the first day, on the beach, with Spitfires flying overhead and real warships."

In Black Mirror's "Bandersnatch," Whitehead plays Stefan Butler, an aspiring video game designer. Stefan is working on adapting a choose-your-own-adventure book called Bandersnatch by fictional author Jerome F. Davies into a video game. And "Bandersnatch" is no average Black Mirror episode — just like the fictional book the video game is based on, the episode allows viewers to choose their own adventure.

Throughout the interactive experience, viewers are presented with endless choices at the bottom of the screen, putting Stefan's fate in the audience's hands. This means that there are numerous ways to watch "Bandersnatch," and that no two viewers' experiences are exactly the same. Not only that, but it means Whitehead and the rest of the cast had to film way more footage than actors would for an average TV episode.

David Slade, who directed the episode, spoke with Wired about the 37-day filming process. “It’s not just different on paper – the entire process is different,” Slade told the magazine. At first, he shot each scene variation angle-by-angle — but after two days, he realized that didn't work, and he switched to filming each scene variation one-by-one. He explained to Wired:

We realized very quickly that we couldn’t do that, and we had to take each scene in a linear order ... So with each scene we had to complete it before we went back and did it again [in a new version]. Because the reactions and where you came from could be different.

"Bandersnatch's" intensive production process was definitely different than anything the team had worked on before, but based on the favorable reviews the episode is already receiving, the hard work was definitely worth it. And the best part? You can watch the episode over and over and have a different experience — and see Fionn Whitehead in new scenes — every time.