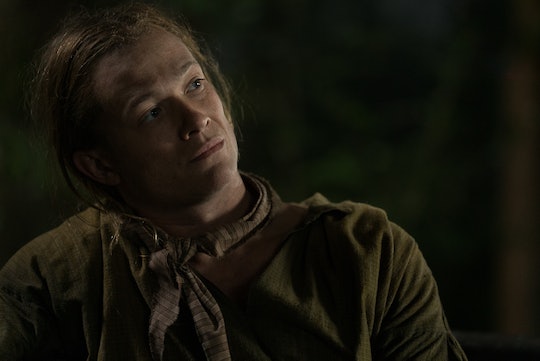 A new antagonist is on the rise on Outlander in the form of amoral pirate Stephen Bonnet. After being saved by Jamie Fraser, Bonnet repays him with trickery and theft. And anyone who's read the books knows that his evil deeds don't stop there. Book readers might be interested to see the villain brought to life on the show, but who plays Stephen Bonnet on Outlander Season 4?

He'll be played by British actor Ed Speleers. Speleers might be best known for his time on Downton Abbey as footman James Kent. But Speleers has had many parts in film and TV, starting off with the lead role in 2006's Eragon. Based on the bestselling novel of the same name, it could have been the start of a franchise, but low numbers at the box office prevented more books in the series from being adapted.

After that, Speleers was in a few different TV shows and TV movies, including Moving Wallpaper, Echo Beach, and Witchville. He also appeared in the feature films A Lonely Place to Die, Love Bite, and Plastic. Then he snagged his role in Downton Abbey. In the years since, Speleers appeared in two miniseries: Wolf Hall, where he played Edward Seymour, and Partners in Crime. He landed a few more film roles, in Alice Through the Looking Glass, The House That Jack Built, and Zoo. But now Stephen Bonnet is going to be taking up his time.

Speelers spoke to Glamour Online about Bonnet, though he steered clear of any major spoilers. He described Bonnet as "a tricky man" before going on to say:

Book fans may be feeling some trepidation ahead of Season 4, because they know exactly what Bonnet gets up to after crossing paths with the Frasers in North Carolina. He's one of the major antagonists in the series, on the level of the truly despicable Black Jack Randall.

Though Bonnet is Irish, Speleers is originally from West Sussex in England, according to The Guardian. He studied drama in school and appeared in a few plays before starring in Eragon when he was just 17 years old. The film's lack of success was difficult for Speelers at the time, as he said, "I lost my focus. I wasn't getting parts, and the few I was being offered were drivel. I took jobs pulling pints and putting up marquees. I thought: 'This one thing you wanted to do in life, you probably won't do again.'"

But of course Speelers would act again. And these days, he's married to costume designer Asia Macey and they have two children. In addition to making his debut on Outlander, fans will be able to see him in the upcoming film For Love or Money.