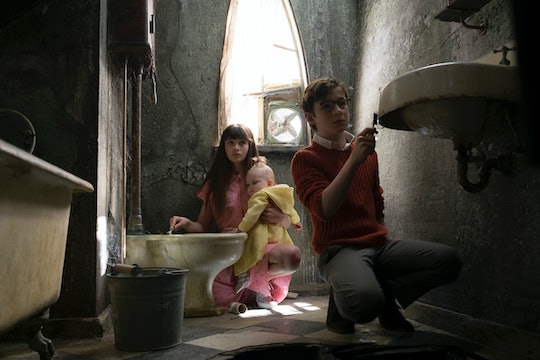 The newest and highly anticipated adaptation of A Series of Unfortunate Events is officially hitting Netflix on Jan. 13 to help get us through this long, cold winter. The cast is possibly the best part with Neil Patrick Harris as the evil Count Olaf, Joan Cusack as Justice Strauss, Aasif Mandvi as Uncle Monty, and Patrick Warburton as Lemony Snicket himself. But one actress might be unknown to you — the tiniest member of the Baudelaire family, Sunny, who is played by Presley Smith. Sunny is the little baby accompanying Violet (played by Malina Weissman) and Klaus (played by Louis Hynes) on this most miserable (and wonderful) adventure.

There were rumors that Sunny would be a CGI prop in the Netflix adaptation, since she's an infant for the whole story and can't speak. Despite some digital editing on her teeth, though, she is very real, although Smith's IMDB bio is obviously limited. After all, Smith is an infant, so she's not exactly giving press interviews. But the other two child actors have been reveling in all the attention coming their way with the release of the new, surreal series. They're probably the luckiest pre-teens in the world — Weissman is 13 and Hynes just 15 — since they got to hang out with Neil Patrick Harris while making the show. Well, sort of. The two told Popsugar that Harris got pretty serious about his role as a villain and their "orphan" status.

"I think he was very focused, so in a way he did [stay away]," Hynes said. "I think that made it really interesting to watch him work, to learn from him, and find out how he works." So at least they learned from his method-style approach. "He really teaches you to just go with your instinct and to try things out. Try something, and if it doesn't work, do it again in a different way. It was interesting for me to learn that from him, in that sense," Hynes added of their on-screen nemesis.

The Netflix series only covers the first four books, but the Quagmire triplets (who aren't introduced until book five) are in this version, too. The 12-year-old Avi Lake will play Isadora, and 10-year-old Dylan Kingwell will play Duncan. The third Quagmire triplet is believed to have been killed with their parents, also killed in a fire — just like Baudeliare clan. Judging from their Instagram posts, it looked like they all had fun on set (even if Harris as Count Olaf threw them some shade).

Poor baby Presley, though, because if the Lemony Snicket universe is bizarre to grown ups — goodness knows what she was thinking throughout the filming process. Harris' Olaf creeps me out, let's hope the little tot doesn't remember a darn thing about her big Netflix debut.