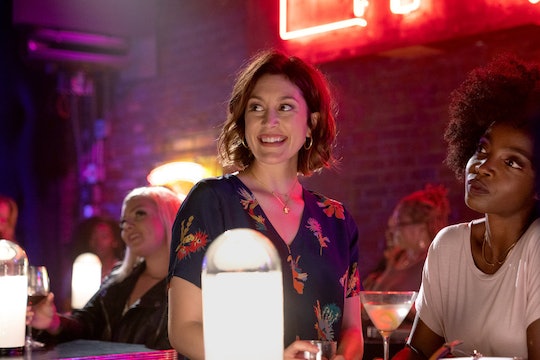 There's a new legal drama on television this fall. On Bluff City Law, actress Caitlin McGee plays Sydney Strait, a lawyer in Memphis, Tennessee looking to escape the vast shadow of her father's law firm. Sydney's father, Elijah Strait, is portrayed by none other than Jimmy Smits, a veteran when it comes to television shows. Despite being side-by-side with a veteran actor, McGee is not only holding her own but quickly making her own name for herself as a TV star these days.

McGee is originally from Boston, Massachusetts, according to the Boston Globe. Since this is McGee's first starring role on a television show, there's very little information about her to be found online — her star status is still climbing, of course. However, it's possible that fans might recognize her from shows like Grey's Anatomy, The Marvelous Mrs. Maisel, and Chicago Med. On Grey's, McGee played Liz Brosniak, the pregnant mother of a boy with uncontrollable seizures. On Maisel she has been a cocktail waitress named Vonnie, and last but certainly not least, she appeared on Chicago Med in 2008 as a character named Hannah.

While on set filming Bluff City Law in Memphis, Tennessee, a long ways from Boston, McGee had a very special visitor: her mom.

“My mom came and she actually came to set which was so special and also really heartbreaking," McGee tells Romper during an interview at Itta Bena's restaurant on the famed Beale Street. "It was a little strange having my actual mother a room away, it was just really heavy."

Spoiler alert: For those of you who haven't started Bluff City Law yet, Sydney's mother dies in the first episode. In fact, it's what eventually brings her and her father, portrayed by Smits, back together.

"Obviously as an actor to make something real for the audience I have to make it real for myself, so my imaginary circumstances are that my own mother is gone," McGee further explained. "Which is most people's worst fear, that’s what my worst fear is. I love my parents so much. It was really beautiful, she was so proud of me which was so nice.”

But, mom wasn't the only one to check in on McGee in Tennessee! During our dinner overlooking Beale Street, McGee gushed over her boyfriend and how helpful he has been with rented apartment in the city.

“My boyfriend came and built all of the IKEA furniture in my apartment," McGee told Romper, then joked: "I better marry that guy, he’s a good one.”

In the meantime, McGee is spending what little free time she has exploring the new city, fondly known as "the blue dot in the red state" for obvious political reasons. One of her favorite places to go? Gus's World Famous Fried Chicken, a fun fact that Smits actually shared about his television daughter, McGee, in an earlier conversation.

Be sure to check out new episodes of Bluff City Law air every Monday at 10pm ET on NBC.