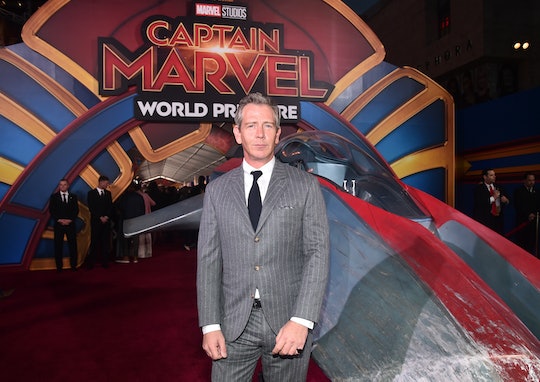 Ben Mendelsohn Is Unrecognizable As Talos in 'Captain Marvel'

The movie, which takes place in the 1990s (talk about a throwback) focuses on Captain Marvel, or Carol Danvers, who has been living and training with the Kree, an alien species who are "at war" with the Skrulls — a species of evil shape shifters who are up to no good, according to Ashbury Park Press. Throughout the film, Danvers tries to remember who she was on earth, before she began training with the Kree, all while fighting Talos — the villain at the head of the Skrulls.

But people won't be able to recognize actor Ben Mendelsohn as Talos; his face is covered with green makeup and prosthetics (which took "several hours" to put on), according to Entertainment Weekly, to make him look like the shape shifting alien that he is.

But there is a lot to learn about the man behind all of the intense face makeup.

Mendelsohn is a 49-year-old father of two from Australia, according to Biography, who has been starring in movies since the 80s. So, if people were unable to recognize his face under all of that intense makeup, then they might have been able to recognize his thick Australian accent in the film.

Playing someone as evil as Talos isn't a stretch for Mendelsohn; he's known for playing villains in films, according to GQ, which he doesn't have a problem with at all. He's played them in Rogue One: A Star Wars Story and Ready Player One, just to name a few. And Mendelsohn told GQ last November that he doesn't mind it, especially since it pays the bills. "You know what, here's the thing about playing the bad guy," he told GQ. "You really can just do it all for the money. That is the true glory of it."

He told Entertainment Weekly in September last year that he does have fun with his go-to role. Mendelsohn said:

Villains have more fun with it. What do I like about it? I don't know! It leaves an imprint on people when you do it right. I think that's nice. I think it's nice to provide the counterweight that people have got to get over, you know? In order to get ahead in the hero's journey. It's a job of honor. It's not for everyone. But I do take it as an honor, I do.

Reviews from Captain Marvel have proved that Mendelsohn took his role as the new Marvel villain very seriously. Mendelsohn's Talos has been referred to as one of the more "memorable villains" from the Marvel Character Universe, according to Digg, thanks to Mendelsohn being a "clear stand out."

But, he wouldn't necessarily know this because he told The Guardian in 2014 that he doesn't watch any of his work after he is done with filming.

Needless to say, Mendelsohn is far from done playing villains, especially since he is so darn good at it.