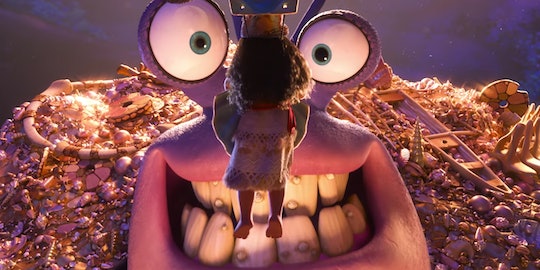 Who Plays Tamatoa In 'Moana'? You Might Have A New Favorite Animated Crustacean

If David Bowie and The Little Mermaid's Sebastian had a baby, it would look like Tamatoa, the magical hermit crab in Disney's new movie, Moana. The colossal crab's shell is caked with "trinkets, goblets, gold, gems," and the like, in order to attract unsuspecting fish. So who plays the Tamatoa in Disney's Moana? I'll give you a hint. The villainous crustaceous creature in the film is pretty much an evil crab version of the feathered antagonist, Nigel, from Rio.

If the sassy and sinister vibe from Tamatoa felt similar to Nigel, then you guessed right. The two characters are actually voiced by the same actor, Jemaine Clement. In an interview with Walt Disney Animation Studios, Clement took on the role fully by playfully hoarding food surrounding him just like Tamatoa accumulates shiny objects and jewels in the film. "He's kind of a collector of things," Clement says while acting out his character as he hides a coffee cup in his jacket. "Spelled my name wrong," he slyly lies while ripping Dwayne Johnson's name off a fruit basket.

In the film, the 50-foot tall Tamatoa faces off with Dwayne "The Rock" Johnson's character Maui in Lalotai, the realm of the monsters. The two have a history of feuding as documented by one of Maui's back tattoos.

“In fact, Tamatoa is in possession of Maui's valuable fish hook, which he desperately wants back,” John Musker, co-director of Moana, told USA Today.

Tamatoa's schemes would certainly make him worthy of being a pet of Ursula from The Little Mermaid. Perhaps that's what dream team directors Ron Clements and John Musker had in mind when designing him since they were the masterminds behind The Little Mermaid, after all. The criminal crab has "a deadpan sense of humor" and "'some very quirky, funny Jermaine-isms." You can spot said Jermaine-isms in the kleptomaniac's song, "Shiny." It looks like Musker and fellow director Clements borrowed the bioluminescent aesthetic from the deepest sea level found in Finding Nemo.

When you watch Moana for yourself on Nov. 23, make sure to stay after the credits for an extra snippet with the gold-digging crab! You can't miss this dig.