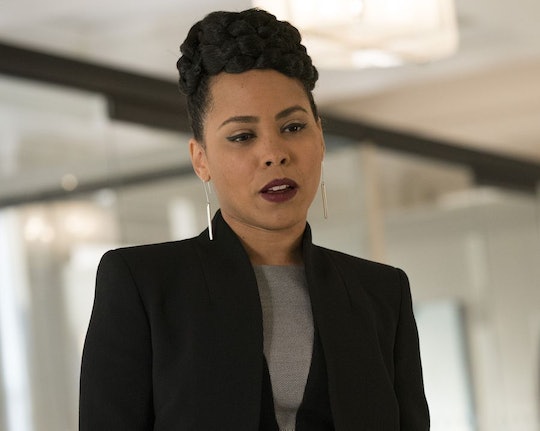 Tegan Price Is Worth Getting To Know On 'HTGAWM'

How To Get Away With Murder is back, and since Annalise spent the Season 4 premiere dumping the Keating Five over fancy dinner, the door has opened for a new mix of characters to join the cast. Somehow, Michaela has landed a job at the prestigious Caplan & Gold (where Laurel's father happens to be a client) and adopted the cunning Tegan Price as a mentor. So who plays Tegan Price on HTGAWM? If you ask me, Amirah Vann is poised to be a breakout star of the season.

She's already become a TGIT fan favorite, thanks to her signature Woman of Shondaland ferocity, killer outfits, and total fearlessness about sporting a bold lip at a stuffy law office. She's also brimming with confidence that is well deserved, making her an intriguing character to watch right off the bat. But where did Vann come from, you might ask? While this is definitely her highest profile series to date, she did get nominated for an NAACP Image Award this year for her work on WGN America's Underground, which starred Jurnee Smollett-Bell, Aldis Hodge, and Christopher Meloni. In fact, she was nominated in the Outstanding Supporting Actress in a Drama Series category alongside her HTGAWM co-star Cicely Tyson.

In an interview with ESSENCE, Vann admitted trepidation in doing a show about the Underground Railroad set in Antebellum Georgia, where her father is from. But Vann quickly realized she was onto something different:

When I first got the audition, I was like, ‘Hmm, I don’t know.’ And that’s literally what people say about the show when they first realize it’s about the Underground Railroad. And I’m with you. I get it. But as soon as I read the script I knew (creators) Misha Green and Joe Pokaski had written something different. We’re not just wading in the water. This is about celebrating our heroes who revolted against slavery.

The short-lived series was cancelled after two seasons, despite critical acclaim and an impressive cast. And if Underground sounds suspiciously like Insecure's primetime drama parody Due North, that's because it served as one of the show-within-a-show's inspirations, along with Empire and Shonda Rhimes in general.

You may also recognize Vann from one of her guest spots on episodes of Girls, Mozart in the Jungle, and Law & Order: Special Victims Unit. She has a theater background with a few Off-Broadway credits, and the Queens native got her BA at Fordham University, followed by an MFA from NYU's Tisch School of the Arts. But to pay the bills before hitting it big, the actress (who's also a singer/songwriter) started performing at weddings, thanks to inspiration from ESSENCE's "Hustle of the Month" column. She told the magazine, "I was a wedding singer and joined a band and ESSENCE told me how to do it."

As for her HTGAWM storyline, fans are already portending a possible grisly end for Tegan. We've seen from the series' signature flash forwards that two bloody crime scenes await us at the midseason finale: one in Annalise's elevator and one at Caplan & Gold. At the latter, we see Oliver looking guilty but Tegan is nowhere to be found. Fans are already speculating that Tegan is being set up as a lovable new character only to die an untimely death at the end of the season. Here's hoping Vann squeezes every last drop out from the role if we do, indeed, have to say goodbye to her later this season.