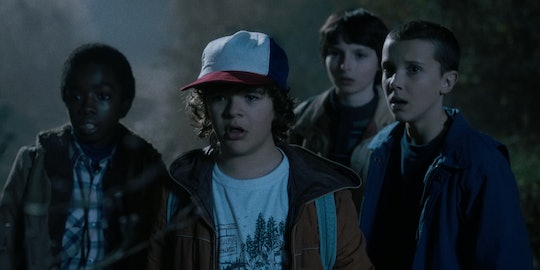 Who Plays The Boys On 'Stranger Things'? They Have A Lot Of Promise

Though new Netflix series Stranger Things boasts Winona Ryder as a lead, the series also relies on a group of four young actors with a whole lot of promise. The boys show up early in the show's first episode ("Chapter One: The Vanishing of Will Byers"), playing Dungeons and Dragons like true '80s tweens in a scene that foretells the creepiness to come. Will, Lucas, Mike, and Dustin take their game seriously but it's not enough to prepare them for any of the trouble to come. Since they're so important to the plot, it begs the question: who play the boys on Stranger Things?

The boys are close friends so when one of their number goes missing, they can't quite resist the lure of a quest. Will (Noah Schnapp) is the missing boy, as well as the son of Winona Ryder's Joyce, and his friends Mike (Finn Wolfhard), Lucas (Caleb McLaughlin), and Dustin (Gaten Matarazzo) are left behind to wonder what became of their lost friend. Will's D&D risk-taking is what inspires the other boys to go on the hunt for him, but more is going on than they can imagine. Each young actor acquits himself well, giving a start to what could be a successful career.

11-year-old Noan Schnapp has more than a few credits to his name, though you might be more familiar with his voice than his face. Schnapp provided the voice of Charlie Brown in 2015's The Peanuts Movie, though he's appeared onscreen too in Bridge of Spies and the upcoming We Only Know So Much. He might be just starting out, but he's already doing very well.

Finn Wolfhard, in addition to having a very Game of Thrones-y name, also has some television experience. Though Stranger Things is his longest-running role, he has also appeared on The 100 and Supernatural. He seems to have found his niche in throwback horror, because he has a part in the upcoming remake of It.

Caleb McLaughlin has appeared in a few TV shows, including Law and Order: SVU and Shades of Blue, but he can also list appearing on Broadway amongst his accomplishments: McLaughlin performed in The Lion King as young Simba. He'll be adding to his TV credits with a part in the upcoming miniseries New Edition: The Movie on BET as a young Ricky Bell. So young, and already a triple-threat!

Gaten Matarazzo also got his start on Broadway with roles in Priscilla, Queen of the Desert: The Musical and Les Misérables. Stranger Things is his first big television role; his only other credit is for a single episode of The Blacklist. After putting in all that work (four shows a week plus school!), there's probably nothing this kid can't handle.

These kids really shine on Stranger Things, but it's even cuter how much they seem to get along in real life, too.