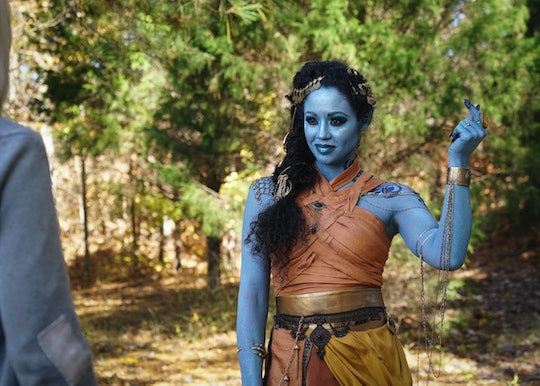 If you could wish for anything, what would it be? Well that’s the question Lizzie Saltzman is going to be asked in the new episode of Legacies. In the trailer for Episode 10, Lizzie is confronted with a blue genie who has the power to turn the world upside down. The actress behind the blue paint is new to the TVD universe, so fans are wondering, who plays The Jinni on Legacies?

Riann Steele plays Ablah aka The Jinni on Legacies, and she might look familiar to some viewers. The New York-born actress grew up in England, where she attended Arts Educational Schools, and then went on to appear in various Royal Shakespeare Company stage productions, and eventually landed roles in notable British and American TV shows. You may recognize Steele from her recurring roles on NCIS: New Orleans, Lovesick, and Crazyhead, or from her most recent role as Catherine Starr in Marvel’s Ant-Man and the Wasp.

On Legacies, Steele is the blue genie that can grant a wish and change the course of history. In the trailer for “There's a World Where Your Dreams Came True,” her character, Ablah asks Lizzie to make a wish. Of course, as jealous of Hope as Lizzie is, she wishes that Hope never came to The Salvatore School for the Young and Talented. With a magical snap and a traditional “your wish is my command,” The Jinni rewinds time to reflect a world where Hope never joined the school.

Without Hope, Lizzie realizes that the school “sucks,” so she asks The Jinni to “fix it.” But in the supernatural world, you can’t get anything that easily without paying a hefty price, and it looks like Lizzie regrets her second wish too. “You must choose your words carefully,” The Jinni warns her, to which Lizzie responds, “I wish there was never a Salvatore School to begin with.” Ouch is right.

In another sneak peak for the episode, Hope and Alaric are discussing what the next possible anti-Malivore creature is coming their way, not knowing that The Jinni is sitting right next to them. “ I wish that knife was never in our school to begin with,” says Alaric. “But it’s not like we can change that now. All we can do is make sure we’re not blindsided by another monster waltzing through our doors.” The Jinni laughs at Alaric’s comment, and whether it’s because she’s the monster that waltzed through or because she’s going to grant his wish, her evil grin signals that she’s probably up to no good.

If The Jinni really does do the things Lizzie asks for — assuming it’s not just a dream — it will be fascinating to see how, or if, things return to normal. Does Lizzie get more than three wishes? Can she magically do something to alter what she already messed up? For the sake of Hope, Alaric, and the rest of the school, I truly wish she does.

New episodes of Legacies air on Thursdays, at 9 p.m. ET on The CW.