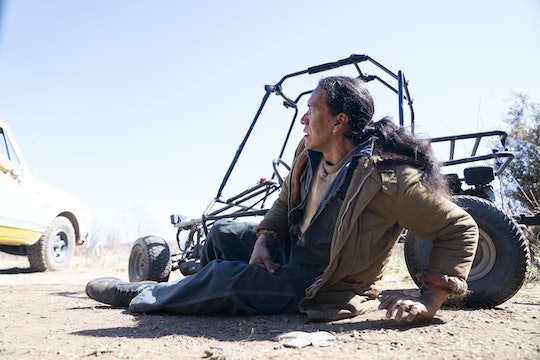 You Might Recognize Michael Greyeyes When 'True Detective' Premieres

The third season of HBO's True Detective follows Mahershala Ali's Detective Wayne Hays as he investigates a case of missing children that bears more than a passing resemblance to the real life West Memphis Three. The first few episodes raise several suspects, one of whom is descriptively referred to as the Trash Man. But who plays the Trash Man on True Detective?

Michael Greyeyes takes on the role of Vietnam veteran and trash collector Brett Woodard. As a suspect in the story, Brett is sure to be a recurring presence throughout Season 3, which means viewers will be seeing a lot of Greyeyes. And you're sure to be familiar with his face, even if you didn't know his name, because he's been in some of the most popular shows of the last few years. He's also had some critically acclaimed film roles.

Most recently, Greyeyes appeared in Fear the Walking Dead as Qaletaqa Walker. Before that, he appeared in episodes of American Gods and Saints & Strangers, though he's been snagging TV roles since the '90s. You might have seen him on Dr. Quinn, Medicine Woman or Charmed back in the day. In addition to his television roles, he's had steady work in film as well.

Greyeyes has been in Smoke Signals and The New World, among many others, but he received particular accolades for playing Sitting Bull in Woman Walks Ahead opposite Jessica Chastain. The New York Times said he was "a miracle of intelligence and dignity" in an otherwise tepid review. And it was a part that meant a lot to Greyeyes, too. While talking to Cowboys & Indians, he explained that it was the most difficult role of his career. He had never seen a Hollywood film "provide this layer of sophistication to a Native character," especially when that character was also a real historical figure.

Though Greyeyes has forged an impressive acting career, this wasn't the path he initially started down. He grew up in Canada (he is Canadian Plains Cree) and attended their National Ballet School before apprenticing with the National Ballet of Canada; he later joined choreographer Eliot Feld's company in New York. But seeing the films Dances with Wolves and The Last of the Mohicans changed everything; according to Greyeyes, seeing himself reflected onscreen in the Native characters made him realize acting was something he could do. He immediately decided to pursue it.

According to the LA Times, when he's not acting, Greyeyes is a tenured professor at Toronto's York University, where he teaches theater. He described himself as passionate and honest in the classroom, adding that his real life experience as an actor helps him with his students. "It allows them to recognize that I'm teaching them something that I do instead of something that I used to do," he said.

As for his personal life, Greyeyes is married to Nancy Latoszewski, with whom he has two daughters. If you find yourself becoming a fan of his once True Detective Season 3 premieres on Jan. 13, then you can catch him in the upcoming film Blood Quantum.