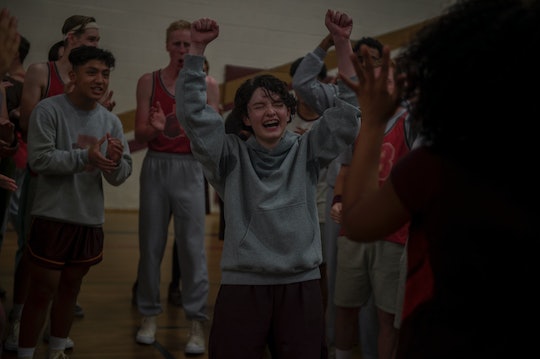 Chilling Adventures of Sabrina Part 2 dropped on Netflix over the weekend and even though it isn't exactly spooky season anymore, fans are still excited for the series' return. One of the major developments in Season 2 is Theo's coming out as a transgender man, choosing a new name, and declaring new pronouns. Viewers may be wondering more about the actor who plays Theo on Chilling Adventures of Sabrina now that his storyline is growing more complex. As it turns out, Lachlan Watson significantly influenced how Theo's story was told.

"I may have influenced the writers to hold off," Watson told Bustle last October. "I talk so much about myself and my identity as a non-binary person and I think they listened, and if anything it helped them understand that labels aren’t everything. Susie is on an ongoing queer journey, just like myself."

The original CAOS script found Susie (Theo's character pre-transition) identifying as a trans man and undergoing transition within the first few episodes. But Watson stepped up to inform the writers that the script was a bit of a rushed and oversimplified take on how gender identities truly evolve. They encouraged the writers to take more time with Susie's coming out, and, as a result, she goes the entire first season without ever quite articulating her gender feelings (though there are plenty of well-placed hints).

A visit from a masculine-presenting ancestor named Dorothea begins to shift Susie's perspective and, by Part 2 of the series, Susie's gender identity begins to come into focus. He begins to consciously identify as transgender, switches to using he/him pronouns, and changes his name to Theo — a nod to Dorothea — which his friends embrace without missing a beat.

"Honestly, it was a little refreshing to be a queer character [and] not be confined to a linear path where ‘oh, the character gets bullied and does research and oh, now they came out,'" Watson told Teen Vogue in an October interview, before Part 2 came out. "It was nice to live in that ambiguous world where Susie can really just be Susie and figure out what they meant without really being pressured to come out and label themselves just yet."

It's a journey that resembles Watson's own. In an interview with MTV News, Watson explained that they felt as if their identity developed in three "acts" — Act I was coming out as a lesbian, Act II was coming out as a transgender man, which involved conflicting feelings on how to approach medical transition, and Act III was finally settling into a nonbinary identity.

“It’s interesting to me that we, as a society, perceive queer journeys as a person going from Point A, which is suffering, to Point B, which is happiness, and it’s like, no queer journey I’ve ever experienced or no queer person I’ve ever talked to has experienced that ever," they said in the interview. "Like, there is no Point B."

Prior to appearing on CAOS, Watson had a two-episode arc on Nashville in 2017, but this series has obviously offered them a massive platform with which to change the way we think about nonbinary characters. Being thrust into an advocacy position can be a tricky thing for marginalized actors, especially ones who are still figuring out their own politics. But the 18-year-old Watson is clearly handling it with aplomb.