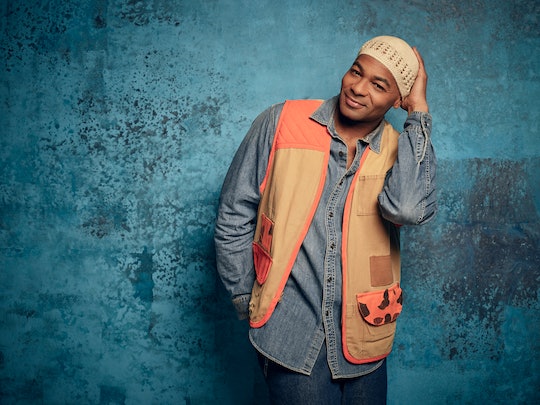 The Actor Who Plays Tom In 'Rent: Live' Has A *Lot* Of Broadway Experience, FYI

The time has come for the Pulitzer Prize-winning musical, Rent, to hit the small screen and the cast is ah-mazing. Surely you've heard that Vanessa Hudgens, Tinashe, and Jordan Fisher are all part of the live event to air on Fox pretty freakin' soon. With such an iconic and important story, you absolutely must know who is who before this thing airs. If the coolest of the cool casts are your cup of tea, and Rent is on your list of all-time favs, you first need to know who plays Tom in Rent: Live and I'm about to break it all the way down. Don't worry — you probably already know the talent behind this actor.

Gaithersburg, Maryland native, Brandon Victor Dixon, is about to smash your TV screen with his portrayal of Tom Collins in Rent: Live as an "anarchist professor with AIDS." Though the character is described by leading dude, Mark, as a "computer genius, teacher, and vagabond anarchist who ran naked through the Parthenon," Tom actually has a different dream in mind. He wants to have his own restaurant far from the NYC scene in Santa Fe and feels largely misunderstood. Dixon is prime for this role because way back in 2011, he already played Tom in the off-broadway version of Rent.

If Dixon looks especially familiar to you, it's because he's been all over the broadway and TV circuits. You may remember him from a small broadway production called Hamilton where he took over the role of Aaron Burr in 2016. He's also the very bad*ss Hamilton actor who famously addressed Vice President Mike Pence, from the stage during the show. As if that's not impressive enough, Dixon also starred as Judas in NBC's Jesus Christ Superstar (alongside John Legend and Sarah Bareilles) for which he received a Primetime Emmy nom for Outstanding Supporting Actor in a Limited Series or Movie. But that's not all. Actually, I'm just getting started.

For many years, Dixon has taken on roles in various touring companies such as The Lion King, House of Flowers, and Encores!, to name a few. His award nominations range from his role of Harpo in the broadway musical, The Color Purple, to his original role of Haywood Patterson in the off-broadway production of The Scottsboro Boys. If none of that rings a bell, maybe you caught him in his first leading role as Berry Gordy Jr. in Motown: The Musical? Still no? That's OK because he does more than act and sing. His producing credits include the 2014 production of Of Mice and Men and Hedwig and the Angry Inch. He's also appeared on a few TV shows like Law and Order and The Good Wife for good measure. I don't know about you, but Dixon's resume is making me tired.

The original Rent, a musical created by the late Jonathan Larson, is set in New York City's East Village during the height of the AIDS crisis. It first opened off-Broadway in 1996, then went to Broadway for 12 years. Dixon's role as Tom is an important one as a member of the impoverished young artists trying to survive through difficult circumstances.

It doesn't matter if you've never heard of Dixon before right now. He has plenty of projects to choose from so you can get all caught up on his talent before Rent: Live happens. So what are you waiting for? Get to it.