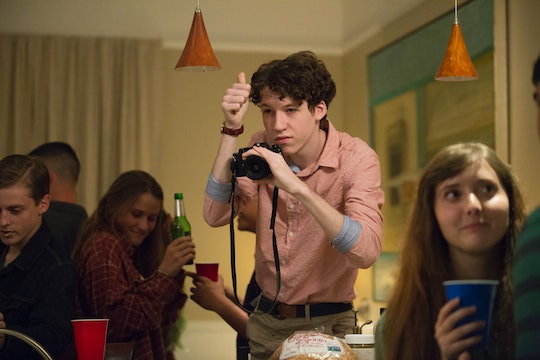 Tyler On '13 Reasons Why' Has Some Serious Range

There’s no denying that all of the young actors in the Netflix series 13 Reasons Why are exceptionally talented, from the more experienced ones to the actors whose first big role may be the show itself. And the actor who plays Tyler on 13 Reasons Why, Devin Druid, is no exception. And not just because he has kind of the perfect memorable name to go along with his acting chops. Druid is only 19 years old, but he’s already worked with names like Daniel Radcliffe, Jesse Eisenberg, and Louis C.K.

This is the same kid whose performance in Louder Than Bombs had theWall Street Journal calling it “flawless” and who Indiewire praised as well, suggesting that the film was a career changing role for the young actor. Druid plays Tyler on 13 Reasons Why, giving the book’s shy and quiet character a face and a voice to go along with it. Tyler is one of the 13 people who, in some way, contributed to Hannah's decision to end her life. His name is on one of her tapes, which means his past sins are about to take center stage.

Through the tapes, Hannah's classmates (particularly Clay) attempt to figure out what exactly led to her suicide through a series of flashbacks. Given that Druid has portrayed heavy characters in Louder Than Bombs, Imperium, and House of Cards, it shouldn’t be surprising to see him tackle yet another important role.

You might call him a character actor, in that he's played a lot of pensive or quiet roles before, but he's used to playing serious ones too and with 13 Reasons Why, there’s another serious and important issue at hand. There is absolutely nothing light or funny about a young girl being driven to suicide because of bullying among her peers, and at its core, that’s what 13 Reasons Why is all about. It deals with a lot of important issues that need to be talked about.

Druid is just one of many strong young actors cast to play a part in the show’s production, and although his earliest role is only from 2012, his reviews speak for themselves and say a lot about the his talent and range. He’s also been steadily working since he burst onto the scene after getting a taste for acting when he experienced a standing ovation during a talent show at the age of 12. And when Druid brings Tyler to the small screen on 13 Reasons Why, there’s no doubt that he’s going to give the role his all.

Druid told StyleWeekly that his character has a lot of facets to him and that the show is going to do it's best to do justice to the book. "I know the book means a lot to those who read it, and I really think this show honors that," Druid said. "It's being so incredibly well done. I can't get into details about the show, but my character, Tyler, is really complex. There are a lot of layers to him." As for what those layers could be, you'll find out once you reach his tape.