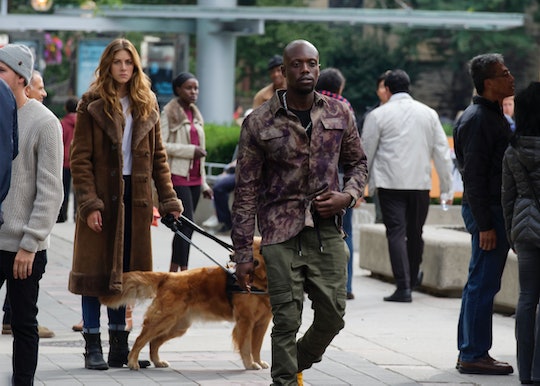 You know when you're sure you've seen an actor in something, or maybe you've heard their voice in an animated series, but you can't quite put your finger on who it is? I'll bet all my money this happens more often than not. With The CW's latest, In the Dark, headed to the network April 4, you may experience this sensation with some of the cast — even the lead role of Murphy, played by Perry Mattfeld. That said, Murphy's friend may fit this category as well and you may recognize who plays Tyson on In the Dark — once I say his name aloud three times fast — but probably not.

Tyson is played by Thamela Mpumlwana. And while the name may not sound familiar, this young actor has already starred in quite a few things such as Star Trek: Discovery, Creeped Out, Rogue, and voiced Ramone in the animated series, Peg + Cat. Mpumlwana has been acting since 2010 — back to when there were pictures on his Twitter account from when he was teeny-tiny (though nothing's been updated since 2016). If you try to find Mpumlwana on Instagram, his account is private but his proud momma's account is very public and she posts a lot of family photos for your enjoyment.

If you scroll all through her page, you'll see Mpumlwana as a young boy with his sister and friends, and all through his career highlights (things any mom would post, but especially if her son is a mega-star). That aside, Mpumlwana's bio on The CW page said he's a Toronto native who "plays a sweet teenager named Tyson. He is Murphy’s closest friend and she is devastated when he goes missing." His film credits include The Warrior and the Savior and Mobile Homes. But again, the resume is pretty lengthy for someone so young and he's only getting started.

If you're into everything I've said, and you want more on Tyson and this new series, In the Dark is about a blind woman (Mattfeld) who becomes the only witness to Tyson's murder. She tells police about her discovery, but by the time they arrive, Tyson's body is gone and no one believes her. She, her guide-dog, Pretzel, and Tyson's drug-dealing cousin, Darnell (Keston John), set out to find the killer on their own. All of this happens when Murphy isn't hating her job at Barking Blind — the guide-dog school her overprotective parents own — and when her dating life isn't a complete mess. Murphy has her BFF and roommate Jess (Brooke Markham), who's overprotective, nurturing, and basically all the things a BFF/roommate should be, while Murphy continues on a path of destruction through drinking and bad dates. All of this, plus Murphy's witty-yet-dark sarcasm is enough to trigger her inner vigilante to avenge Tyson's death.

Now that you know Thamela Mpumlwana, don't forget him. I mean it. Though his role on In the Dark as Tyson is a major plot point for Murphy's story arc, it'll be short-lived in terms of seasonal screen time for Mpumlwana (because he's murdered, obviously). Still, this kid is one to watch so go check out his IMBD page and catch up. You can thank me later. Or, now is fine, too.