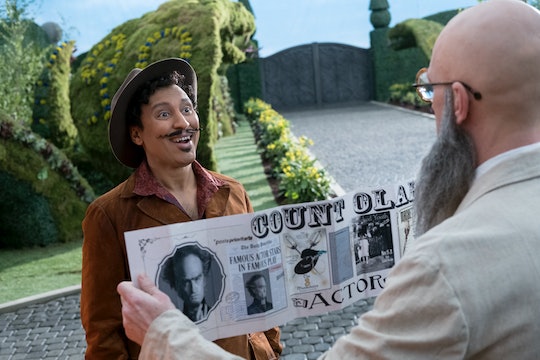 (Warning: this post contains unfortunate spoilers from Episode 3.) The new Netflix series based on Lemony Snicket's bestselling series, A Series of Unfortunate Events, is finally here and it's amazing! Whether you've read the books or not, you'll love the new show, and that's mainly because of it's amazing cast of characters. One of my favorite characters so far is the Baudelaire's children's Uncle Monty. So who plays Uncle Monty on A Series of Unfortunate Events? You'll recognize actor Aasif Mandvi as the one who secured the role.

After Violet, Claus, and Sunny were taken out of the care (if you could call it that) of Count Olaf because he attempted to marry Violet in order to claim their fortune, they were then taken to live with Dr. Montgomery Montgomery. (Yup, his first and last name are one in the same.) The good doctor, who asked to be referred to as Monty, was supposed to be the Baudelaire children's guardian in the first place, but their parents' banker, Mr. Poe, wasn't the best at his job. In any case, they finally arrived at Monty's place and it was a much better home than the one they had with Count Olaf.

Monty was smart, fun, and was friends with the Baudelaire's parents. He was also set on protecting the children, something he unfortunately didn't really get a chance to do for long. But for the short time Monty was on the show, he brought a great time of happiness to the children and Mandvi played the role perfectly.

Mandvi has an extensive resume and it's not at all surprising that he was cast as Uncle Monty. The actor has had various roles both on the small screen and the big screen. You may recognize him from the films Mother's Day, The Internship, Movie 43, The Dictator, It Kind of a Funny Story, The Last Airbender, The Proposal, Music and Lyrics, and Spider-Man 2. He's also appeared in countless TV shows, including The Brink, Halal in the Family, Madam Secretary, Jericho, ER, CSI: Crime Scene Investigation, and Law & Order: Trial by Jury.

Although Mandvi's time on A Series of Unfortunate Events is short, it's very memorable and I miss him already. Thankfully, the characters on the show seem to only get more and more interesting with each passing episode and there are still so many more mysterious and strange characters to meet.