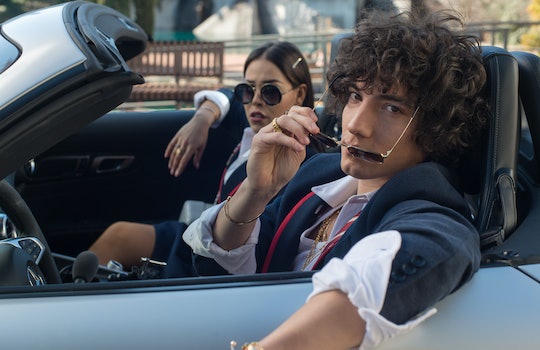 Lu Welcomes Her Brother To 'Elite' In Season 2

The second season of Netflix's popular rich teen murder drama Elite digs deeper into the mysteries of Season 1 while opening up new avenues and introducing new characters. One addition is Lu's (Danna Paola) half-brother Valerio. Finding out what Valerio brings to the table depends on how fast you can marathon the new episodes, but learning who plays Valerio on Elite Season 2 could offer a little insight.

Jorge López joins Elite as Valerio. He's in an interesting position; as Lu's brother, he's technically already entrenched in the character's lives, but he's still a completely unknown entity to the audience. López might not be, however, because Valerio isn't his first role. He's appeared in a few TV series over the years. His very first part was in the 2011 movie Violeta Went to Heaven, but it's been strictly television since then. López was in Decibel 110, Mamá Mechona, Soy Luna, and Wake Up. If he looks familiar to you when Valerio and Lu drive up to school together, then perhaps it's because you saw him on one of those shows first.

Especially because he made history on Soy Luna by being the first Chilean actor to star on an international Disney show. That big break definitely brought him closer to mainstream success, and Elite's vast Netflix viewership may take things even further.

Before López snagged his TV roles, he studied acting at the Universidad de Artes, Ciencias y Comunicación of Chile, according to his website bio. He also appeared on stage in the musicals The Wizard of Oz, Chicago, and Peter Pan. He managed to be as successful on stage as onscreen, because his role in Soy Luna led to a Latin American concert tour. Per his website, he performed in 42 shows in 10 countries. Then in 2014, he was selected as one of Madonna's dancers for her Hard Candy show in Toronto. With López's song and dance skills, would it be too much to ask for an Elite musical episode?

Sadly, Valerio might not have much time to break into choreography, because he may be too busy causing trouble. Variety described Valerio as an "ecstasy guzzling party-party addition to Las Encinas," but there's more to the character than rich boy extravagance. "Valerio has a super-rich interior world," López said at a press conference, as reported by Variety. He also seems to have had a fairly easy time adjusting to the show's locale, adding, "It's been doubly surprising to get to a new country but feel so comfortable."

López shares his offscreen endeavors on his Instagram account. In between plenty of Elite promo and inspiration pics of other stars, he posts vacation snapshots and selfies. There's even a cute dog photo or two, to make sure he's checked off all the Instagram boxes: mirror selfies, check; doggo smooches, check; gorgeous photographs of the ocean, check. López's Instagram has it all.

But it doesn't have any more information about Valerio, unfortunately. The character is a blink-and-you'll miss it presence in the Season 2 trailer, but the good news is, you won't have to wait any longer to get to know him.