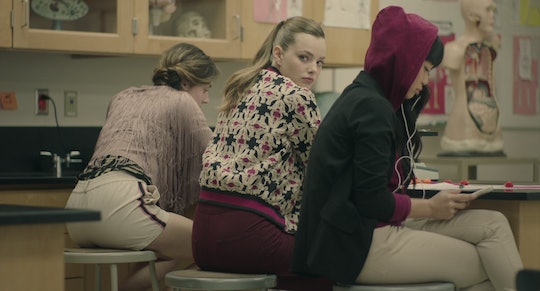 Here's Who Plays Veronica In 'Sierra Burgess Is A Loser'

Netflix is gearing up for its second teen rom com release in three weeks with Sierra Burgess Is a Loser hoping to live up to the success of last month's To All the Boys I Loved Before. Sierra Burgess stars Shannon Purser as the titular loser opposite the most popular girl in school, Veronica. The new movie has an all-star cast including To All The Boys' Noah Centineo, so viewers may be wondering: who plays Veronica in Sierra Burgess Is a Loser? Kristine Froseth comes from the modeling world but she's starting to break into acting in a big way.

She's already landed a W Magazine profile to promote the film, in which she reveals that she split her time between Norway and New Jersey as a kid because of her dad's job. "It’s such a weird combination," she admitted in the interview. "We’d go back and forth because of my dad's job. They were very, very different. As a kid, I didn’t really appreciate it, because you have to say goodbye to your friends all the time."

But after getting scouted at a mall, she began modeling and, eventually, getting acting auditions, too. The 21-year-old, who now lives in New York, was actually tapped to play the lead role in the film adaptation of John Green's YA novel Looking For Alaska, a project which suffered a series of stops and starts and eventually fell apart.

Prior to Sierra Burgess, Froseth made an appearance in The Weeknd's 2016 music video for "False Alarm," and landed a role in the 2017 J.D. Salinger biopic Rebel in the Rye, starring Nicholas Hoult and Zoey Deutch. She appears in two upcoming horror films, including next month's Netflix release Apostle, and another one called Prey. And later this year, she's slated to appear in the 10-part Epix miniseries The Truth About The Harry Quebert Affair, which stars Patrick Dempsey, and an indie film called Low Tide.

As for the role of Veronica in Sierra Burgess, Froseth said it was love at first read, telling W:

I received the script and fell in love with it. I laughed and cried, and felt that it did such a good job of telling this story but through a different perspective. And it’s more about female friendship than just a girl trying to get the guy. There were so many things within the script that I was obsessed with.

She doesn't exactly identify with the popular mean girl she plays in the film — as someone who was very much in fear of that clique as a high school student herself. But Froseth did admit that getting to play a cheerleader was fun, and working with Purser was a highlight of the project

"[Shannon Purser] is the best," Froseth gushed. "She is such a sweetheart and just 100 percent goodness. She always had my back, and I’m incredibly grateful to have gotten to work with her."

Shannon Burgess Is a Loser drops on Netflix Friday, Sept. 7.