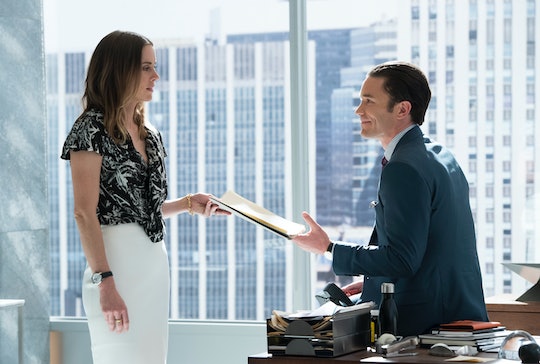 Ward Meachum Has A Past With 'Iron Fist'

Netflix's new Marvel series follows Danny Rand who returns to New York City after being presumed dead for the past 15 years. Once back, he hopes to regain control of his father's business, Rand Enterprises, but his father's former business partner, Harold Meachum, doesn't want to relinquish control. To make matters more complicated, it's Harold's children and Danny's childhood friends, Joy and Ward, who are helping to run the business now. For some viewers, Ward may look familiar, so who plays Ward Meachum on Iron Fist? Soap star Tom Pelphrey will be portraying the character.

If you've ever been interested in soap operas, you'll probably recognize Pelphrey. He starred in the popular CBS soap Guiding Light as Jonathan Randall, appearing in over 150 episodes, before the show was cancelled in 2009. He then moved on to another CBS soap, As the World Turns, for more than 30 episodes before that show was cancelled the following year. From there, he's made appearances in a variety of TV shows, including The Good Wife, Body of Proof, Blue Bloods, The Following, Black Box, and Law & Order: SVU. He also landed a recurring role on the Cinemax drama Banshee as Kurt Bunker and even reprised the role in the Banshee Origins miniseries. This year, besides appearing in Iron Fist, he made an appearance on Chicago P.D.

That's not to say that Pelphrey hasn't also appeared on the big screen as well. In fact, he can be found in the films Blink, #LuckyNumber, Sam, The Girl is in Trouble, Anchors, A Cry from Within, Tiger Lily Road, Turtle Island, Excuse Me for Living, and Hostage.

Pelphrey's role as Ward on Iron Fist is still a little unclear. It's possible he'll be an antagonist to Danny since his father is definitely a villain, but that doesn't necessarily have to be the case. Danny and Ward go all the way back to their childhood days, so it stands to reason they could end up being friends. However, if it comes to a choice between Danny and his father, one would assume Ward would choose his dad, especially if it meant he'd get to control the million dollar company that's technically Danny's birthright.

Appearing alongside Pelphrey is Jessica Stroup who play's Ward's sister Joy. Her role is similar to that of Ward since they both work at Rand Enterprises. However, I can't help but wonder if there's a possibility of a romance between Joy and Danny as well. Fans will just have to wait and see how this reunion plays out.