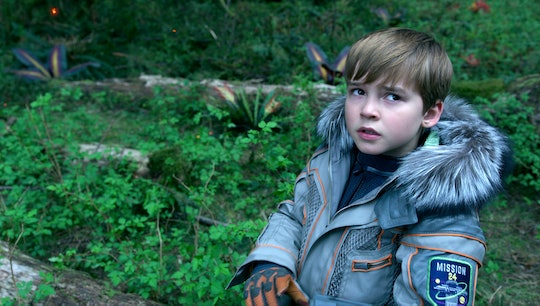 You'd be forgiven for not recognizing the youngest star of Netflix's reboot of the beloved '60s show, Lost in Space, but that doesn't mean he isn't already a busy and accomplished actor. So who plays Will Robinson on Lost in Space? Maxwell Jenkins has only been acting for the past couple of years, but in that time he's already made a big impression on Hollywood. Oh, and did I mention that he's only 12 years old? So he still has plenty of time to take over the entertainment world.

Lost in Space follows the Robinson family, who find themselves stranded on an alien planet when their spaceship is sabotaged on the way to their destination, Alpha Centauri. The show is modeled after the original CBS show that aired back in the 1960s, though it has been updated with a darker, more modernized tone than the original. Not everything has changed though. Like the original, the reboot of the show will focus on the family coming together to survive in the alien world, as well as bringing back "Robot." Will Robinson is the youngest member of the family as well as the origin of the phrase, "Danger, Will Robinson." It's a big role for a young kid to take on, but a quick scan of Jenkins's resume is enough to prove that he's likely got the chops for it.

According to his IMDB page, Jenkins has been acting consistently since his first big break in 2013 playing Oliver on the drama series, Betrayal. After that, Jenkins scored roles on TV shows like NCIS and Chicago Fire, where he was featured in two episodes. Jenkins also played Young Owen in Andy Samberg's goofball comedy Pop Star: Never Stop Stopping, and as a young leukemia patient in the heartbreaking A Family Man. These parts led to his role as Young Will in the popular show Sense8, before he landed the part of Will Robinson.

As successful as he already is as an actor, movies and TV shows are hardly the only thing that Jenkins does with his time. In addition to I'm assuming school (he is still a child, right?), Jenkins's parentally-monitored Instagram account says that he is also a "circus performer, actor, mandolin player, snow boarder." Ah to have the energy and stamina of the young, am I right? His official IMDB bio states that he "is a member of the Chicago based "Midnight Circus", and can be found playing his mandolin in his band, Cowboy Jesus & The Sugar Bums," which is an objectively fantastic band name. The trivia section of the bio also states that he and his sister Samantha "perform in their family's theatrical circus company, Midnight Circus." In the circus Jenkins "performs an acrobatic balancing act with his father." You know, normal father-son bonding activities.

I can't actually confirm this, because I'm not actually sure how it's possible, but I believe that Jenkins must sleep at some time because he's a human boy who needs sleep to function. But I'm really just guessing here. When I was 12 my only extra-curricular activity was going to dance classes a couple of times per week. I'm not sure how this kid is doing it.

What I am sure of is that he's already impressing the pants off of me and I'm excited to see what this little dynamo brings to Lost in Space. And who knows what his future in show-business will hold, but I have a feeling he's going to be around for quite some time.