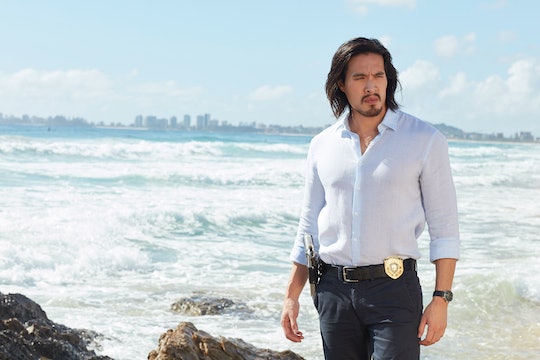 Want More Wyatt On 'Reef Break'? Me Too.

ABC has a breakout hit this summer with Reef Break (pun welcome), the procedural show about ex-thief Cat Chambers (Poppy Montgomery) who returns home to paradise to help the mayor and other powerful people solve crimes. One of those others is a police detective. If you're wondering who plays Wyatt Cole on Reef Break look no further. Desmond Chiam is bringing paradise the representation it needs.

Chiam grew up in Australia and studied law at University of Melbourne. Luckily for TV fans, sometime after that he had a change of heart and moved to California to earn a Masters Degree in Writing for Screen & Television at USC.

Before landing the role as peacekeeper in paradise on Reef Break, Chiam had guest spots on hit shows like Bones, NCIS: Los Angeles, and Hawaii Five-0. He's also played Riga on the short-lived sci-fi adventure series The Shannara Chronicles, and Jethro on Now Apocalypse, a Starz series about a man on a quest for "love, sex, and fame" who begins to believe in "the possible presence of a dark and monstrous conspiracy," according to IMDb's description. Cool, cool.

Sometimes, you find rare gems when you dig deep into an actor's filmography. Video shorts can be hard to find, but when I saw that Chiam was in a parody called Asian Bachelorette 2 I had to search for it. I expected a laborious quest to ensue, but it's a gift you can find with a quick YouTube search. So, you're welcome.

It's about 10 minutes of joy, but also commentary on the fact that there is definitely not enough Asian representation in the entertainment industry. But things are slowly starting to look up as far as Asian American representation in TV and movies goes.

After Crazy Rich Asians became a massive hit, Chiam got the role in Reef Break. He's said that he and some of his Asian American actor friends can still hardly believe it. We actually have this little group chat and we said, 'Hey, we're all working right now, simultaneously,'" Chiam said in Nikkei Asian Review. "That has never happened before."

But, of course, the core of a person exists on their Instagram feed, right? Chiam is currently posting a lot of behind-the-scenes pictures from his time filming Reef Break in Queensland, Australia.

He actually keeps his feed fairly professional, but his humor definitely shines through, for example joking he doesn't plan to stay in such good shape "while Korean fried chicken exists," and posing seductively in front of a hotel towel swan.

Chiam is easy on the eyes, yes, but I also recommend watching his Insta stories to hear his smooth, deep voice. I'm happy that he had so much fun filming Reef Break and that it's such a big hit, but, if he ever had a change of heart about his career again, he should look into recording meditations for apps.

In any case, it doesn't look like Chiam's career is slowing down any time soon.