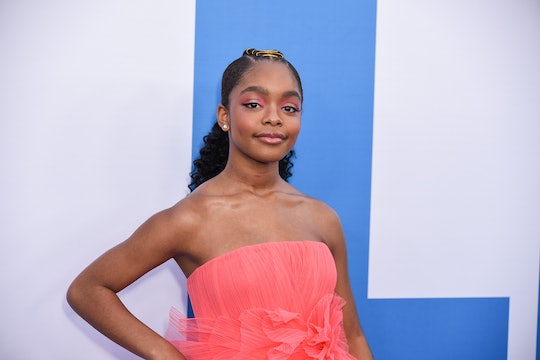 If there are people who don't know Marsai Martin's name by now, they are definitely going to want to learn it — especially if they go out to see Little. After seeing the film, audience members will have some questions. And will definitely be wondering — who plays young Jordan in Little? It's about time that people become acquainted with Marsai Martin, because she is well on her way to taking over Hollywood.

In Little, Martin stars as Jordan Sanders, a high powered tech boss who is transformed into her 13 year old self, all because of a magical curse, according to NPR. She stands out in the role, convincing audiences that she is a 38 year old woman trapped in a teenager's body while still humanizing the role. Not only this, but Martin holds her own among her older counterparts, proving her sheer amount of talent. If she wasn't already a household name because of her role as Diane in ABC's Black-ish, then Little will make her a household name.

And this is only the start of her career.

Her rise to fame might seem like it happened over night. Her first paid acting gigs involved her starring in commercials, according to BuzzFeed. But in 2013, she scored her first big break when she booked Black-ish, which she has starred in for the past five years. Although she has appeared in movies over the years, Little is her first feature film — and she just so happened to come up with the idea herself, according to Jezebel.

Martin came up with the idea for Little (which is why she's probably so amazing in it), using the 1988 Tom Hanks film, Big, as inspiration, according to MTV News.

"It took me a minute to process the whole situation and how we could make this in a different way, not necessarily a remake, but make it more of a modern and fresh perspective; make it diverse and inclusive," Martin said.

It makes sense that Martin seems wise beyond her years, which makes her a great role model for other young girls like herself. And Martin has some fantastic advice for anyone aspiring to make moves, especially in Hollywood.

"You're gonna get a lot of no's more than yeses but you will have to find the right people who trust in you, and believe in you, and will continue to work with you because you've got potential," Martin told People. "I think a lot of people hesitate because they don't know they're good enough, or don't think they can do it because they're not this or that. But being yourself is all you need."

So what's up next for Martin? She will be developing projects, like Little, with her production company, Genius Productions, for Universal, according to Entertainment Weekly. Martin is not only a boss, but she's giving other young people the opportunity to be bosses themselves with her new projects.

"That's the point I'm trying to get across in Little: Kids can do anything, and that's how adults need to see things, too," Martin told Entertainment Weekly.

Little is a pretty convincing argument for Martin's case — don't forget her name, because people will be hearing about it for years to come.