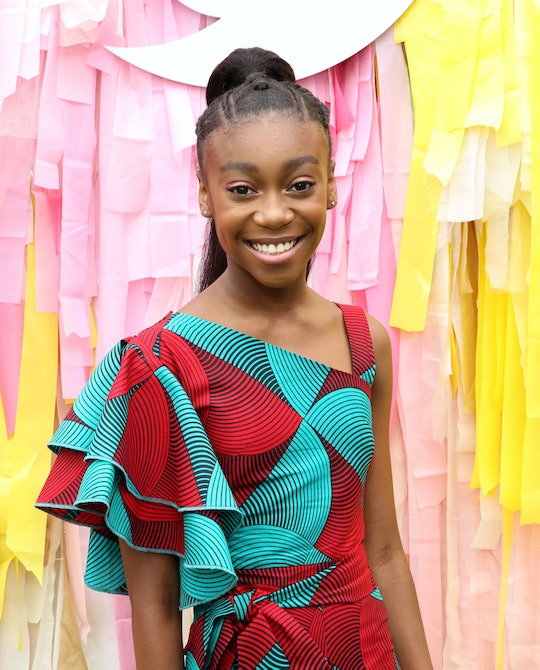 Who Plays Zora In 'Us'? Shahadi Wright Joseph Already Has An Impressive Résumé

A new film from Get Out’s Jordan Peele is set to hit theaters this weekend and there is no confusion about the genre of this one — it is straight up horror. Us stars Lupita Nyong’o, Winston Duke, and Elizabeth Moss alongside Evan Alex as the frightened family’s son. But what about the daughter? Who plays Zora in Us? Shahadi Wright Joseph is a film newcomer who is already establishing a successful career.

Wright Joseph may be fairly new to the movie world, but she’s made a name for herself in musical theater and on Broadway. According to Deadline, she was the youngest actress ever to play Young Nala on Broadway in The Lion King. She also performed in the Broadway version of School of Rock as Madison. And in 2016, she was cast as Little Inez in Hairspray Live!, according to her IMDb page.

She’s also been cast as the voice of Young Nala in a new film version of The Lion King that is currently in post-production, according to IMDb. Jon Favreau is attached as director and other voices include Donald Glover, Chiwetel Ejiofor, Beyonce, and Alfre Woodard.

Wright Joseph’s biography on Broadway World notes that she started out as a print model for Fisher Price. From there, she began training with a dance group called Purelements at the age of just 2. According to her biography, she attends Trey Whitfield School in Brooklyn, where she is a member of the concert choir.

Us is Wright Joseph’s first foray into film production. She plays the role of Zora, the daughter of the Wilson family who take a beach vacation to Santa Cruz. From the trailer, it seems that all is well until a family shows up in their driveway and begins terrorizing them — the catch is that the family looks exactly like the Wilsons.

Jordan Peele’s previous writing/directing effort, Get Out, was a smash success with a hard to define genre. Most people settled on comedy-horror, a unique mashup that rarely produces the kind of critical acclaim that Get Out saw. With Us, Peele isn’t leaving any question about the content thought, it’s all horror. And Peele loves horror.

“For my second feature I wanted to create a monster mythology,” the director told Entertainment Weekly. “I wanted to do something that was more firmly in the horror genre but still held on to my love of movies that are twisted but fun.”

Peele gave Nyong’o a list of 10 horror movies to watch before filming started so they could create “a shared language,” he told Entertainment Weekly.

It’s doubtful that Peele was able to give Wright Joseph the same list to watch — she is only 13 years old, according to Houston Style — but it sounds like he didn’t need to. He told Entertainment Weekly that both she and Evan Alex, who plays the son in the film, had “relative fearlessness when it comes to horror and dark, creepy stuff.”

Look for Us in theaters on Friday, March 22.