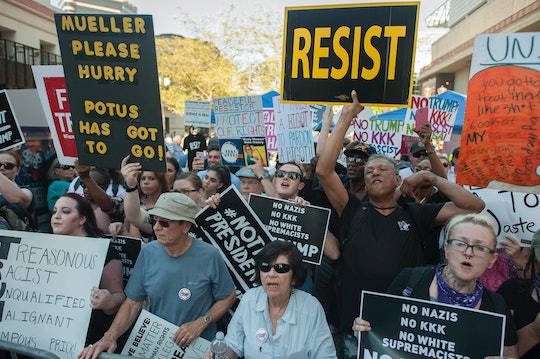 On Tuesday, President Donald Trump arrived in Phoenix, Arizona to give a campaign-style rally, and unsurprisingly, it caused a lot of controversy. Trump spoke for nearly 90 minutes in his signature off-the-cuff style, and took aim at the media and the North American Free Trade Agreement, before telling the audience that they “[knew] where [his] heart is,” regarding Charlottesville. But Trump's appearance drew large protests in the city, and what began as a peaceful protest ended with police using tear gas to break up the crowd. Who protested Trump's Phoenix rally? Lots of people were not happy with what the president had to say.

There's no question that Trump's rally came at a difficult time — with the outrage over Charlottesville, and his response to it, still fresh in many people's minds, it's no surprise that the event drew a big response. According to The Washington Post, the rally drew a crowd of Trump supporters who chanted “USA! USA! USA!” as the president spoke, but outside, the situation looked quite different. According to CNN, large crowds gathered outside the Phoenix Convention Center to voice their opposition, including many chanting against racism and neo-Nazis, and also in support of Heather Heyer, the Charlottesville counter-protester who died after she was hit by an alleged white supremacist who had driven his car into a crowd.

According to The Los Angeles Times, the rally drew thousands of protesters, leading to shouting matches with Trump supporters over their opposing views. But while the situation was predominantly peaceful, the demonstrations took a turn when some of the protesters allegedly attempted to break through security barricades, while others were said to have begun throwing rocks and water bottles at the police.

In a tweet Tuesday night, Phoenix police alluded to "criminal behavior" in one area of the city, and urged protesters to disperse, according to CBS News. Police then began using "pepper balls and tear gas" on demonstrators, while footage also appears to show protesters being shot with rubber bullets:

According to Axios, numerous protests were planned ahead of Trump's rally Tuesday by a variety of different groups. The Anti-Defamation League's Arizona chapter organized a protest tied to Trump's appearance in Phoenix called, "Never Again: Jews and Allies Against Hate Rally," and in a Facebook page for the event, organizers wrote that the goal was to "make clear that we will not accept the false equivalency between neo-Nazis and peaceful protestors who oppose hate."

Organizers for the "Protest Trump Downtown Phoenix" demonstration didn't mince their words regarding Trump's response to Charlottesville — they called him a "white supremacist leader" — but similarly urged people to "stand in solidarity with the brave people in Charlottesville," against "bigotry, hate, white supremacy, Nazis, Islamophobia, transphobia, xenophobia," while another group urged people to protest while wearing purple to honor the memory of Heather Heyer. Their goal? To "tell Trump that Heather's positive intentions were in no way equivalent to those of the racists and bigots present at the rally in Charlottesville."

Despite the police's use of tear gas and other agents, many have since come out on social media to debate the claim that the anti-Trump protesters had been violent. BuzzFeed News producer Andrew Kimmel tweeted an interview with one Phoenix protester, who claimed that the crowd had been predominantly peaceful and that the response wasn't warranted. An unnamed protester said that while someone was throwing water bottles, "the rest of the crowd was calm." He said,

I kept looking at him dead in his face like, 'you can't do this. You cannot provoke them. We are the resistance. They will fire on us. We don't have gas masks. They do'.

Other users shared similar stories of a largely-peaceful crowd, and said that the police's decision to use pepper spray at least appeared to be mostly unprovoked:

According to AZ Central, Phoenix Mayor Greg Stanton told reporters following the protests that "the job of the Phoenix Police Department ... was to make sure that everyone got home safely," and that "the good news" was that "that is exactly what happened." Phoenix Police Chief Jeri Williams denied a reporter's claim that the situation in Phoenix was "chaotic," and said that the police responded with tear gas only after protesters threw "their own gas" at officers first. Williams also said that officers "adequately warned" protesters ahead of time.

According to CBS News, four people were arrested on charges related to the protest, two of whom face charges of aggravated assault.

While it's clear that not everyone appears to agree on what actually happened in Phoenix last night, the protests do seem to make it pretty clear that Americans are not happy about Trump's rally, and with the way he handled the situation in Charlottesville. And they definitely aren't afraid to show up and speak out against him.