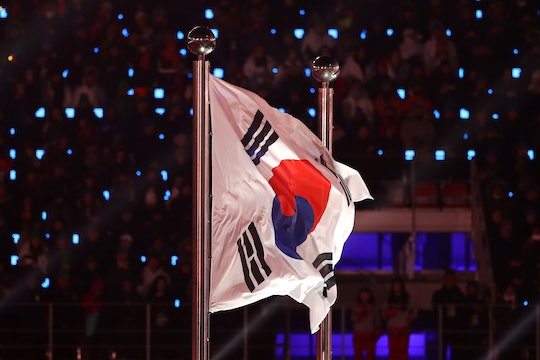 Who Sang "Imagine" At The Opening Ceremony? It Was A Moving Performance

The theme of the 2018 PyeongChang Winter Olympics opening ceremony is peace, and given the fact that athletes from North and South Korea have come together to march under a united Korean flag during the event, it seems like a particularly appropriate one. After the athletes marched in the Parade of Nations, a group of four musicians came together to sing "Imagine" at the opening ceremony, according to The Guardian, and the iconic John Lennon song felt like the perfect choice.

The "Imagine" singers included South Korean folk singer Jeon In-kwon, indie rock singer Ha Hyun-woo, and K-pop singer Ahn Ji-young, and singer Lee Eunmi according to The Mirror, and during the performance, the musicians sang in between two large symbolic doves (formed by performers!), which made for a particularly impressive view from overhead. But while the performance was clearly meant to send an important message about love and unity, not everyone was sold on the actual execution — or even on the song choice to begin with. On social media, many praised the performance for being meaningful, while others took jabs at the quartet's singing, and the fact that the song followed the Parade of Nations, despite literally containing the line, "Imagine there's no countries."

Of course, "Imagine" is the type of song that will always have an emotional impact for many people, and that was clearly seen on Twitter, as a number of users chimed in with their support for the performance:

While others felt it held extra significance given the difficult political realities facing many countries at the moment:

But, as is usually the case on social media, not everyone was here for it. There were those who couldn't help but think the song was actually not an appropriate choice for the Olympics at all:

While others couldn't help but make a joke:

And then, well, let's just say that everyone's a critic when it comes to covers of beloved songs:

But the official description of the performance in the program shows that, more than anything, it was all meant to be a reflection of a hope for unity and peace among nations during the games, which is a totally worthwhile intention, regardless of whether or not you liked the performance itself. According to The Guardian, the Olympic program read,

Candlelight symbolizing hope spreads from one person to the next. When the warmth of candlelight fills the stage, everyone becomes of one heart and starts to sing. Hoping for peace, the five children release the dove in the skies above Pyeongchang.

To be fair though, the song itself does have a bit of Olympic history. In 2012, a children's choir sang "Imagine" during the Summer Olympics closing ceremony in London:

Of course, there are few events that are quite as high-profile on a global scale like the Olympics, so it's not even sort of surprising that everyone seemed to have a different take on the "Imagine" performance. It's not easy to sing such an iconic song — particularly when you're performing with four other musicians, and when English isn't even your first language — and then, well, the critics aren't exactly wrong to think that somewhere along the line, the original meaning of the song may have been lost in an event that is literally based on countries competing against one another.

But at a time when the world could definitely use a little more unity and peace, there's something particularly meaningful about hearing the song be performed, and it at least gives the suggestion that better days might be ahead. And for the four performers who actually got the opportunity to sing the song, it will no doubt be something they'll remember for a long time to come.