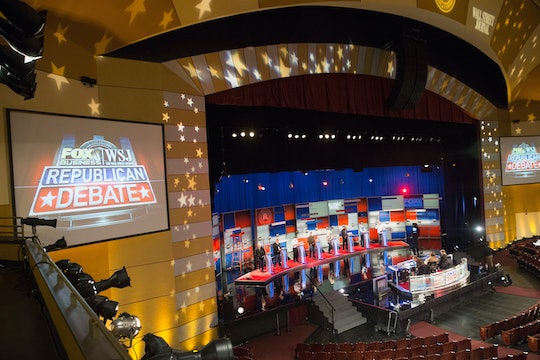 Who Sang The National Anthem At The Fourth GOP Debate? Brooke Singman Received A Huge Round Of Applause For Her Rendition

In the fourth GOP debate tonight, the name of the game was the economy, with moderators Maria Bartiromo, Niel Cavuto, and Gerard Baker focusing on some serious questions ranging from tax reform to raising the minimum wage. But before the questions even began, viewers tuned in to see the Color Guard take to the stage, along with a woman in a red dress. Soon, a voice rang out across Milwaukee Theater and the National Anthem could be heard. The performance itself gained a huge round of applause from the audience; but it wasn't long before one question swept Twitter: Just who sang the National Anthem at the GOP debate?

It was an obvious question, given the fact that FOX Business didn't announce the songstress at the start of the program. But as fast as Twitter asked the question, it supplied an answer: The singer was Brooke Singman, a FOX News political reporter who also just so happens to have a powerhouse voice. Dressed in a sleek red dress for her party's color, Singman took the mic and commanded the show. Sure, the show runners at FOX Business may have neglected to announce her name, which is kinda a gaffe, because, well, she's a journalist for FNN in addition to a singer. But no matter — we know it now.

And the Twitterverse sure seemed to like her OK.

And in case you were wondering, before Brooke got her start as a political reporter for the network, she was a former intern there. At least, according to this guy:

Oh yeah, and her emoji game is tight.

Thanks for entertaining us tonight, Brooke. You rocked it.