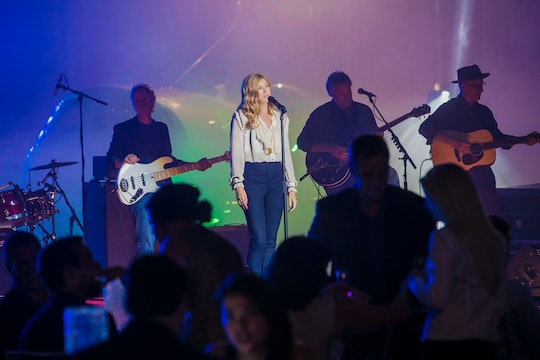 Rayna May Have A Stalker On 'Nashville'

Following a rehashing of a very old fight with Deacon on the season premiere of Nashville, Rayna received a lovely bouquet of flowers with a sweet note reading, "For the only woman I ever loved." But uh, they definitely weren't a make-up gift from her husband. So who sent Rayna flowers on Nashville? Folks, it seems we definitely have a stalker on our hands in Season 5.

Even though early reviews of Nashville's CMT debut promised a slower pace to make room for more character development, the episode still ended on a creepy, cliffhanger-adjacent note. (Get it? Because it's a musical drama?) The premiere wrapped up on a POV shot from inside a car just outside Rayna's office, establishing, in case we had any doubts, that Miss Jaymes is definitely being watched by someone other than the paparazzi. So who's the culprit? The first episode of Season 5 gives us two possible suspects.

First, there's Zach Welles, the Silicon Valley tech bro/bajillionaire who flew Rayna out to San Francisco to play a gig for some very uninterested country music non-fans. Zach, however, was oddly enraptured by her performance. She was confused about why she was there, but he explained that his mom used to listen to Rayna Jaymes religiously, and that's how he became a fan.

Later in the episode, when Rayna was back in Nashville, she got a call from Zach on her cell phone and learned that he'll be visiting soon. He wanted to meet up to talk about some music industry venture. It seems like an innocent enough expository exchange, but if you watch closely, Zach very awkwardly laughs it off when Rayna asks how he got her number and quickly changes the subject. Creepy.

Potential Creep #2 (who is admittedly much more obviously creepy) is Randall St. Claire, Highway 65's new social media and digital marketing manager. He's another tech guy, but one of a very different ilk than Zach. They're both nerdy, but Randall seems like a much more socially awkward loner type, while Zach is slightly more charming... but just as overly intimate.

Randall, too, gushed to Rayna about what a big fan he is of hers and was generally a little too enthusiastic when he got to meet the bosslady. He aggressively shook her hand with both of his own (which lasted a little too long for both Rayna and viewers) and just seemed to come on way too strong. Rayna was polite as ever, but she definitely clocked that there was something a little off about the guy.

So one of these guys definitely seems like the culprit, while the other is meant to be a red herring that makes us feel bad for stereotyping tech guys as creepy stalker loner dudes who harasses women. (Except that probably really is going on in one of their cases!) It's a nice little sudsy treat to get us back into a show that once held so many plot twists. It doesn't feel like Nashville missed a beat at all in its tumultuous summer network jump.