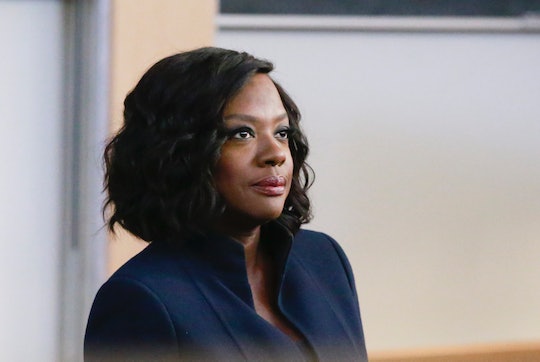 Who Set Annalise's House On Fire On 'How To Get Away With Murder'? Frank May Want Revenge

How to Get Away With Murder is back and as with it's first two seasons, the premiere episode left us with a lot of questions. The last two minutes of the episode time jumped to two months in the future where someone's dead body is being rolled away from Annalise's house, which is on fire because why not? That was a lot to throw at us in less than two minutes and it seems we'll have to wait a while before we get any answers but that doesn't mean we can't hypothesize. So who set Annalise's house on fire on How to Get Away with Murder and who's body is under that white sheet?

If anyone's going to set Annalise's house on fire it would Frank. After being banished from Annalise's home and life, he's been off the grid. He shaved off his hair and beard and is doing who knows what. The only person that's been able to find Frank is that guy Annalise sent after him and it definitely seemed like Annalise was thinking about having Frank not only found but killed. Unfortunately for Annalise Frank is way too skilled to be caught by surprise and it was Annalise's hit man that ended up dead, murdered while still on the phone with Annalise. If that wasn't a warning to Annalise about Frank's current state of mind I don't what is.

After realizing Annalise may actually try to kill him, it wouldn't be all that absurd for Frank to try to retaliate. Also, so many terrible events have occurred in that house that you'd think Annalise might want the house burned down. Sam died there, Rebecca died there, it's where Annalise finally learned the truth about Frank and Sam, and the list goes on. Annalise's house seems less like a home and more like a murder house these days.

So hypothetically Frank burns it to the ground but who dies? The best guess is Nate. The way Annalise screamed and lost it just seems like a reaction she'd only have if it was Nate. No offense to the Keating 5 but Annalise just doesn't love them that much and honestly it's always hard to tell how she feels about Bonnie. If Nate died it would tear Annalise apart and that's what seems to be happening here.

The truth probably won't be revealed until the mid-season finale but leading up to it we will find out who's not dead, which is always fun. Make sure to tune in to ABC on Thursdays at 10 p.m. EST to see who lives, who dies, who tells their story on How to Get Away with Murder.