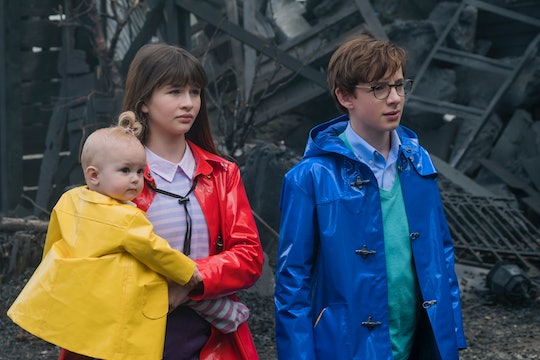 (Warning: this post contains unfortunate spoilers from Episode 1.) The Series of Unfortunate Events TV series is finally here and people are already hooked, and with good reason. Although it's a series of unfortunate events, the show is also a bit funny and filled with a lot of mystery. In the first episode alone, fans were left with a lot of questions, including who set the fire on A Series of Unfortunate Events? There's already a clear prime suspect in the form of the villainous Count Olaf.

As the closest living relative to the Baudelaire children — and by closest I mean by distance, not familiarity — Count Olaf became the legal guardian of the three children. However, Count Olaf is pretty much the worst person you would ever want to be living with. He forces the children to do horrible chores, only gives them money to make a meal he wants them to prepare for him and his theater troupe, and it's completely obvious he's only after the children's fortune. It makes sense that Count Olaf would start the fire that "killed" the children's parents so it would be a bit easier for him to get a hand on the Baudelaire money. Plus, it's not like Count Olaf has given viewers any evidence that he's a kind person, so murder doesn't seem out of bounds for him.

Still, the end of the first episode presents a different picture. It's revealed that the Baudelaire's children's parents are apparently alive, though, it seems they've been imprisoned. Trapped in the back of a truck that's going somewhere unknown, the parents reveal they're worried about their kids (as they should be) and know they must escape in order to help them. It seems most likely that whoever took the children's mother and father started the fire, but who is it?

It couldn't be Count Olaf since he's currently with the children, but maybe it's someone who's working with or for him. Truthfully though, this kind of diabolical plan seems a bit too complicated for Count Olaf to pull off. He's evil and kind of crazy, but not all that smart, at least when it comes to going up against the children. (All of the adults he's encountered so far he's been able to hoodwink.) Even so, he is the most likely suspect, at least for now.

If you've read the books you probably know exactly what's going on with all of this, but for those who haven't, you'll just have to keep watching to find out the truth.