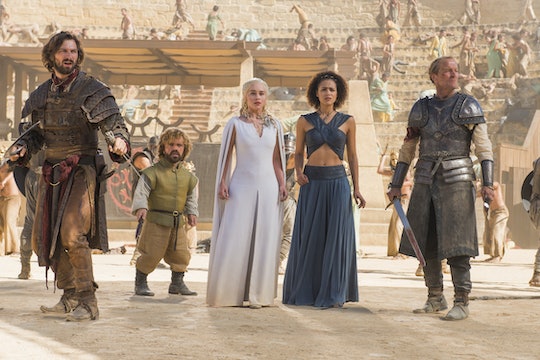 Who Set The Ships On Fire In Meereen? Viewers Need To Know

The last time we saw Meereen on Game of Thrones, there was a war breaking out in the fighting pits. Now, at the beginning of Season 6, Tyrion and Lord Varys are facing a further dilapidated city and making many viewers wonder, Who set the ships of Meereen on fire?

The short and easy answer would be the Sons of the Harpy, since they are the ones who started the battle in the fighting pits of Meereen. Didn't they get the memo that those pits are for organized fights to the death only? And with the unwanted queen Dany gone, it would only make sense that the rebel group continue to lash out against the city itself as protest. Because, if you recall correctly, ever since Daenerys took over Meereen, everything she has done has been met with hella resistance.

Then again, there is the matter of Dany's dragons, of which there are still three. We know Drogon is out doing his own thing wherever he please, but who's to say that he didn't make a stop back in Meereen when the Dothraki carted Daenerys away, to breathe some more fire down on the city? And there is also the very real possibility of the other dragons having escaped, since we haven't seen them in a good whole season or two. Never count them out, though, since they, too, are likely growing at the alarming rate that Drogon has been.

Remember in a couple of different promos, when we see Tyrion come face to face with one of the other two dragons? Maybe he is checking to see if they're still securely locked up and finds one to be missing, and also the source of the ship fire in Meereen. Whoever set fire to the ships of Meereen, though, ensured that both Tyrion and Varys will definitely be settling in there for a good part of Season 6.