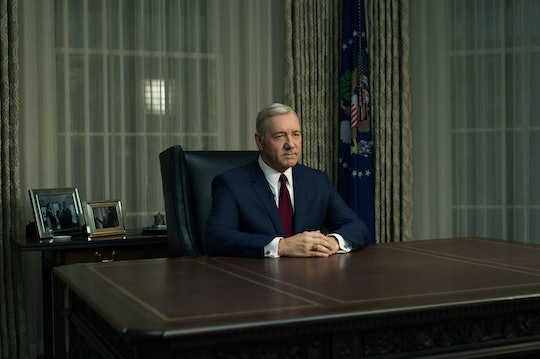 Who Shot Frank Underwood On ‘House Of Cards’ Season 4? His Past Came Back To Haunt Him

(Warning: This post contains major spoilers for Season 4, Episode 4 of House of Cards.) Well, well, well. If this isn't the past coming back to haunt Mr. Frank Underwood. After three seasons of ruining people's lives, backstabbing friends, and even killing people, Frank Underwood found himself getting a taste of his own medicine in Episode 4. While at a rally for his campaign, Lucas Goodwin shoots Frank, almost killing him on the spot. We know that Lucas doesn't like Frank — he suspects that he's not only politically corrupt, but that he could have been behind Zoe's death — but Frank's assassination attempt on House of Cards came out of left field.

The shooting truly came out of nowhere in Episode 4. While we knew that Lucas was trying to prove Frank's guilt by meeting with Heather Dunbar's camp, I really didn't know he had an assassination attempt in him. If anything, it felt that Season 4 was going to be the season Lucas accepted the fact that Frank Underwood is not someone you go up against. He had just been released from jail after being an informant on his cellmate and was now known as "John Carlyle." He was told to keep a low profile, but when has Lucas ever been known to follow the rules?

Back in Season 2, Lucas set off to prove that Frank Underwood was a bad guy. He had a lot of theories, but couldn't prove them until he got phone records from AT&T. That's when he enlisted Orsay, who got him arrested for cyberterrorism. So, yes — Lucas had an ax to grind.

Despite the major domino effect that occurs once Frank was shot, there's not much more to be said about Lucas. He was killed on the spot at the attack and is just another face in the In Memoriam section of House of Cards. Although, even though he's gone, his name continues to haunt the 2016 campaign. Heather Dunbar is later roped into a scandal with knowing Lucas, as her camp met with him regarding Frank's indecent behavior. So, even though he's dead — Lucas is still somehow screwing things up for those in power.