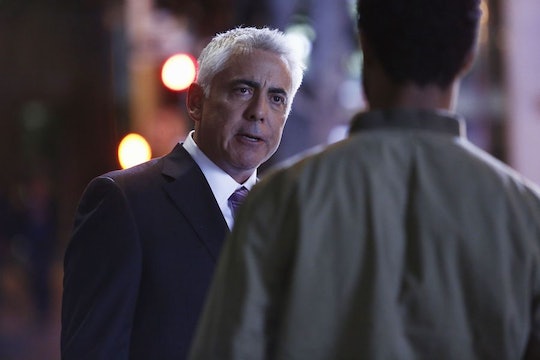 Who Shot Wes' Dad On 'How To Get Away With Murder'? Season 2 Ended With Another Mystery

Now that we've closed the book on two seasons of How To Get Away With Murder, it's becoming more clear that the show's format aims to showcase one murder to ~get away with~ each season. Each episode serves as a chapter in the murder's story (and, puzzlingly, with the staff of Annalise Keating's law firm getting progressively more entangled). The Season 2 finale gave us one big hint as to what Season 3's murder coverup may be, with its final moments dedicated to the cold-blooded killing of Charles Mahoney. So, who shot Wes' dad on How to Get Away with Murder? There might already be some clues to the culprit's identity.

In the season finale, Mahoney had just been revealed to be Wes' father, which occurred as a result of years spent raping Wes' mother while she worked for the Mahoneys as a cleaning lady. But, since Wes was standing right in front of his dad just before he was shot — revealing that he was his son and about to start a conversation with him (presumably about his mother) — we can rest easy knowing that Wes doesn't have even more blood on his hands for now. (Though his face was not so lucky, as Mahoney's gruesome shot-to-the-head left him spattered with blood. Poor Wes is like the poster boy for PTSD.) It's possible, if Wes runs or if there aren't any witnesses around to attest to what happened, that it might look like Wes did it, which might lead the team to spend next season trying to hide that Wes was there. But who really did shoot Charles Mahoney is a different story.

The Season 2 finale feels set up to lead the audience to believe that it was Frank who shot him. It comes out that Frank is inadvertently to blame for Annalise losing her baby ten years ago, since it was Frank who bugged Annalise's room, and made it possible for Charles to put a hit on her when it became clear she would be helping Wes' mom. Mahoney orchestrated the car accident that led to the stillbirth of her child with information he obtained via Frank. Frank, in a fit of guilt after Annalise learns the truth and fires him, disappears. (Laurel goes through a very tense scene searching his apartment for him, during which there are hints at a possible suicide attempt. But ultimately, Frank is nowhere to be found.)

Right after that, Charles Mahoney is shot dead in the middle of the street in New York by an unknown assailant from an unseen vantage point. The camera pans back showing only Wes and Mahoney, so we know the shooter is at least not immediately visible to Wes. The way the scene is shot also suggests that the bullet comes from someone hiding out in an adjacent location, like across the street. All the hints point to a professional-style hit, which we know is a skill in Frank's wheelhouse.

Eve Rothlo also lives in New York, but while her character loves Annalise very much and feels protective of her, a heat-of-the-moment, crime-of-passion murder in the middle of the street doesn't really feel like her style. She is a high-powered attorney, after all. But it is entirely possible that she becomes Wes or Frank's safe haven in New York, harboring them until Annalise can come to the rescue.

Needless to say, it seems pretty clear that this cliffhanger will be the murder mystery we get to watch unravel next season, unless there's an even more shocking death afoot.