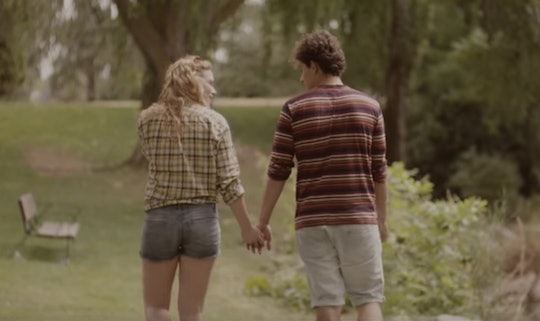 Who Sings In The Extra Gum 'Can't Help Falling In Love' Commercial? Haley Reinhart Is An 'American Idol' Alum

It's pretty clear that Wrigley was totally on top of its viral video game with its most recent ad for Extra Gum, "The Story of Sarah & Juan." A sweet love story? Check. A heartfelt, down-on-one-knee marriage proposal? Check. A totally on-point cover of an Elvis Presley classic? Check, check, check. When the ad was first released online back in October, it pretty much made the entire Internet cry — including Ellen DeGeneres, who gave the vid a huge boost after she shared it on Facebook. But not only did the ad itself do well, the song behind the ad has also been super successful. Who sings in the Extra Gum commercial? The voice behind the all-the-feels spot is former American Idol contestant Haley Reinhart, and, according to Billboard, the success of the commercial has seriously helped her career.

The Extra ad was created by advertising agency Energy BBDO and was designed as a follow up to a popular 2013 ad spot the company ran, called "Origami." According to Billboard, Energy BBDO knew that they wanted a cover of "Can't Help Falling In Love," to accompany "The Story of Sarah & Juan," and eventually handpicked Reinhart from a group of about 30 to 40 artists that they'd listened to. Reinhart had already made a name for herself after placing third after Scotty McCreery and Lauren Alaina on the 10th season of American Idol, according to Entertainment Weekly, and also from her YouTube collaboration with Postmodern Jukebox. And it definitely seems like they made the right choice: according to Billboard, Reinhart's cover sold 19,000 downloads within the first week of the ad hitting the Internet (before it had even been released on television), and debuted at number 48 on Billboard's Digital Songs chart. Not too shabby.

The ad's success is great news for Reinhart, who has had a bit of a rocky time establishing herself since leaving Idol. Despite earning critical praise, her debut album, Listen Up! didn't do very well commercially, and Reinhart was subsequently dropped from Interscope records in 2012, according to Entertainment Weekly. But, thanks in part to the ad's more than 18 million YouTube views, Reinhart announced in March that she'd been signed to a new deal, and would be releasing her second album, Better, later this year, according to The Hollywood Reporter.

If Reinhart's new music is able to strike the same chord in listeners that her Extra gum soundtrack did, chances are she'll have a hit on her hands. After all, she pretty much helped the Extra commercial ruin Twitter emotionally:

Well played, Extra Gum. BRB, gonna go cry in a corner and leave a bunch of gum wrappers on my husband's side of the bed.