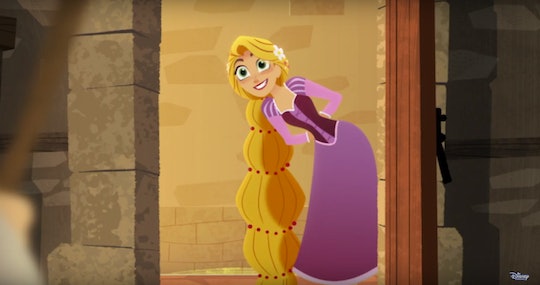 Who Stars In The 'Tangled' TV Series? Fan Favorites Are Returning To The Upcoming Show

The new series will welcome back stars like Mandy Moore and Zachary Levi, who will reprise their roles as Rapunzel and Flynn Rider, a.k.a Eugene, respectively. Three other actors revisiting their voice roles include Jeffrey Tambor as Big Nose, Paul F. Tompkins as Shorty, and M.C. Gainey as Captain of the Guards.

The series takes place in the timeframe between the original hit, Tangled, and it's followup short film, Tangled Ever After. In the show we can expect to go on new adventures with the Rapunzel, and her trusty companions: Pascal, the chameleon, and Maximus the horse. The "Snuggly Duckling Pub Thugs" will also be making their way into some of the episodes.

On top of seeing familiar faces, we will also hear some familiar sounds. According to Entertainment Weekly, "The series will also feature new songs by longtime Disney collaborator Alan Menken (The Little Mermaid, Beauty and the Beast), who wrote the music for the original film, and Glenn Slater."

The motion picture soundtrack was already addictive with songs like "When Will My Life Begin," so prepare to have songs stuck in your head days after you watch episodes. But more importantly, I want to find out how Rapunzel managed to get her insanely long blonde locks back.

Watch the trailer below as you hug your imaginary pet chameleon. I'll wait.

It's so vibrant and awesome, right? I would watch daring Eugene ride a horse any day. And just look at how green and dreamy Rapunzel's eyes are. Not to mention her golden hair, perfectly set against the sunshine from a window. Talk about a potential TRESemmé commercial. What a visual! She looks like the female version of Hercules once he "glows up" and becomes a God. Specific details of the premiere will be brushed out at a later time, but for now you can expect to "see the light" on a weekly basis come 2017.