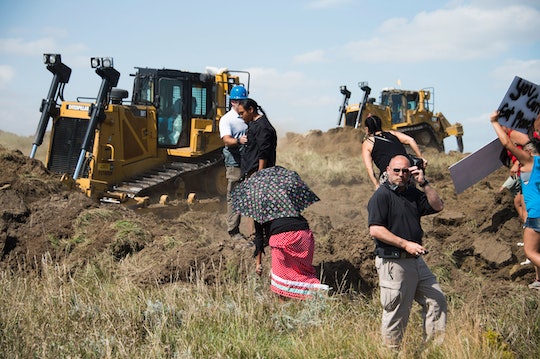 Who Supported Dakota Pipeline Easement? Sources Claim Civilian Leadership Was Against It

Over the weekend, Dakota Access Pipeline protestors secured a major victory in their fight against the construction of the pipeline that would run through land sacred to the Standing Rock Sioux tribe in North Dakota. But anyone who is cheering on the Army Corps of Engineers (who manages the land and has the final say about about whatever is built on it) might want to wait just a bit. According to sources, NBC News reported Tuesday that those who supported the DAPL easement may have only been curtailed in their goal at the last minute, and on a technicality. NBC News reported late Tuesday evening that the Army Corps of Engineers (ACOE) actually approved the easement, which would allow the companies behind the DAPL to continue construction, but that the civilian leadership of the ACOE denied it. Romper's request for comment from the ACOE was not immediately returned.

According to NBC News, "because of the pipeline's size — 30 inches in diameter — its approval went to Assistant Secretary of the Army for Civil Works Jo-Ellen Darcy"; Darcy, in turn, reportedly made the decision to put a stop to the pipeline construction plans through Standing Rock, saying in a statement that it was "clear that there's more work to do."

In layman's terms, if there had been different civilian leadership calling the shots, the pipelines construction might not have been halted. Either way, as it stands, it might not be the absolute end to the DAPL. There have been rumors (all unconfirmed) that Energy Transfer Partner (ETP), the company who owns the pipeline, was allegedly accepting the $50,000 per day fine to defy the ACOE's ruling. Those reports are unconfirmed, but given the new information that the decision to deny the easement wasn't unanimous, it's natural for DAPL protestors and their advocates to worry. The news that civilian leadership might have pushed the ACOE's hand also fits with ETP's position on the easement denial.

On Sunday, ETP released a statement saying that they were not giving up just yet. It also called the ACOE's denial of the easement a "political action," meant to just further delay construction until President Obama is out of office. (It has a point. The Obama administration has dragged its feet about coming up with a solution or even a position on DAPL.)

ETP also called out the ACOE for being half-in and half-out. It wrote:

For more than three years now, Dakota Access Pipeline has done nothing but play by the rules. The Army Corps of Engineers agrees, and has said so publicly and in federal court filings. The Corps’ review process and its decisions have been ratified by two federal courts. The Army Corps confirmed this again today when it stated its “policy decision” does “not alter the Army’s position that the Corps’ prior reviews and actions have comported with legal requirements."

ETP believes that the Obama administration's directive to the ACOE was just a way to cater to a "narrow and extreme" constituency. Either way, construction is halted, for now. But President-elect Donald Trump just sold his stock in ETP this summer. So the ACOE and ETP might get their way after all come January. Only time will tell.