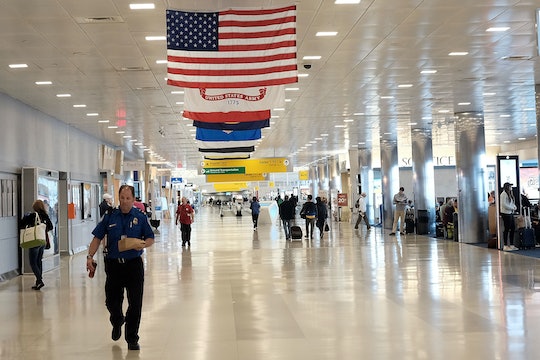 President Donald Trump outraged many in January when he unveiled his executive order preventing those from a number of Muslim-majority countries from entering the United States — so much so, that courts challenged the order, basically forcing his administration to revise the policy. The new plan wasn't any better, but late Monday night it became clear that he still wasn't done enacting travel restrictions on Middle East and North African travel: according to The Washington Post, beginning Tuesday, laptops, tablets and other electronics will no longer be allowed on any flights to the United States departing from 10 specific airports in Muslim-majority countries. Who supports Trump's electronics ban? The decision seems to have come from Secretary of Homeland Security John Kelly and Transportation Security Administration acting administrator Huban Gowadia, in response to what senior administration officials said was “evaluated intelligence” about the risk of terrorists “smuggling explosives in portable electronic devices.”

According to TIME, the group of airports affected by the ban got the order at 3 a.m. Tuesday by way of a government-issued Emergency Amendment, and gave them 96 hours to comply. But despite the swift movement, officials have said that the decision wasn't in response to a specific terror plot, but that the ban was something the government had been considering "for some time," according to CNN. They also stressed that while the devices will no longer be allowed in carry-on baggage, passengers can still travel with their electronics, so long as the items are kept in checked luggage. Smartphones and medical devices will still be allowed to be brought into the cabin as usual.

The new restrictions will surely be a massive headache for both airlines and passengers alike (who wants to travel all the way from Egypt or the United Arab Emirates to the United States with only a phone or a book to pass the time?), but given the ongoing fears about terrorism and air travel after 9/11, there are surely many Americans who will feel comforted by the notion that they are being protected by the new measures. The question, though, is are they actually being protected? The Trump Administration obviously thinks so, but since the news broke, many have questioned the validity of that claim.

In an interview with BuzzFeed News, an anonymous "former administration official familiar with aviation security procedures" called the electronics ban an "overreaction," and said that the sudden action appeared to really be "a Muslim ban by a thousand cuts," that didn't seem to be "a targeted application of reasonable security measures." University of California law professor Paul Schwartz, also questioned the focus on Muslim-majority countries, according to The Guardian, and noted that "terrorists have cells throughout the entire world." By focusing only on certain countries, he explained, the actual reality of the threat of terrorism gets ignored.

Tech experts, on the other hand, wondered why banning electronics from the cabin would even help. After all, as University of California, Berkeley International Computer Science Institute researcher Nicholas Weaver explained to The Guardian, those items would still be present in checked luggage anyway, and smartphones would theoretically pose just as much of a risk. Of the ban, Weaver said,

It’s weird, because it doesn’t match a conventional threat model. If you assume the attacker is interested in turning a laptop into a bomb, it would work just as well in the cargo hold. If you’re worried about hacking, a cellphone is a computer.

Security technologist Bruce Schneier agreed with Weaver, and told The Guardian he thought the restriction seemed unnecessary, at least as far as the threat of electronics is concerned:

From a technological perspective, nothing has changed between the last dozen years and today. That is, there are no new technological breakthroughs that make this threat any more serious today. And there is certainly nothing technological that would limit this newfound threat to a handful of Middle Eastern airlines.

In their explanation behind the introduction of the restriction, government officials argued that there were already a number of examples proving that electronics posed a risk, according to TIME, like the suicide bomber who attempted to bring down Somalian airline carrier Daalo Airlines Flight 159 in 2016, allegedly with a bomb hidden in a laptop. But according toThe Guardian, of the examples cited by the Trump Administration, the Daalo Airlines flight was the only one that actually involved a bomb being brought on board, and it's an airline that doesn't even fly to the United States. Add to that the fact that, according to NPR, none of the countries affected by the electronics ban were named in the executive order on immigration, and are all U.S. allies. It's led some to wonder if the decision wasn't really about safety at all.

On Feb. 9, Trump met with large national airline carriers and freight companies — including Delta, United, and American Airlines — to discuss their concerns that the financial support of three major Persian Gulf airline carriers by Middle Eastern governments meant that American carriers could not compete, according to Bloomberg. While the White House did not disclose which airlines were specifically discussed in the meeting, in a separate request to meet with Secretary of State Rex Tillerson to address the issue, the U.S. carriers named Emirates, Etihad, and Qatar Air as allegedly having an unfair advantage. All three airlines have also been included in the electronics ban.

Of course, as of yet, it's not known if there is any connection between the U.S. airline carriers' concerns and the electronics ban, and neither the White House nor the three Middle Eastern airlines have commented on the issue. It's also still not entirely clear exactly what the impetus was for the ban in the first place — whether the White House believes that the restriction was necessary despite the arguments about smart phones and cargo baggage and terrorists flying in from elsewhere, or whether there is more to the story that hasn't yet been shared. Either way, one thing seems absolutely certain: if any Middle East-to-United-States travel is in your future, you're probably going to want to pack some extra crossword puzzles.