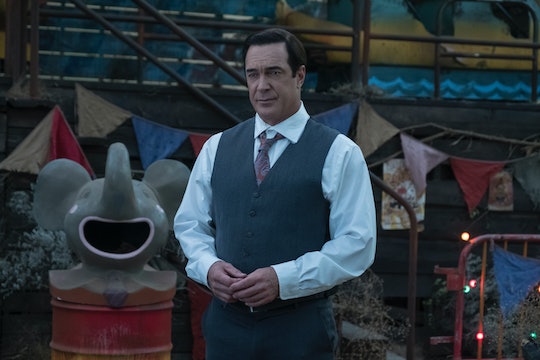 Warning: spoilers for Season 2 Episode 7 ahead! In the second season of A Series of Unfortunate Events, the Baudelaire siblings received a rare bit of hopeful news. While searching the records room at Heimlich Hospital for relevant information, they came across a video that indicated not everyone had perished in one of the series' major fires. But who survived the fire on A Series Of Unfortunate Events?

There are a few possibilities, though the mystery persists. The film that Violet, Klaus, and Sunny watched (known as "the Snicket file") was frustratingly free of details. It depicted a now-deceased Jacques Snicket being debriefed after some kind of mission. An unseen interrogator asked Jacques to tell him, in excruciating detail, anything he knew about Count Olaf, "the recent rash of fires," or the orphans. But first Jacques had an important update: someone may have survived the fire. He had no guarantee that someone actually had, nor did he mention their name or which fire he was referring to. There are a couple to choose from.

The Baudelaire siblings (and later Count Olaf) assume that Jacques is referring to the fire that killed their parents at the very start of the series, and it's easy to see why, based on what he said. However, the Quagmire siblings lost their parents and their brother Quigley in a fire as well. That means the possible survivors could be one of the Baudelaire parents (named Bertrand and Beatrice in the book series) or one of the Quagmires. But Jacques could even be referring to a fire the audience isn't familiar with; there are a lot of them on this show, after all.

It was obvious that the Baudelaire children are holding out hope that one of their parents made it out alive, and that's not as unrealistic as one might think. There was a secret passageway linking the Baudelaire home to 667 Dark Avenue, which meant it could have provided an escape route to Beatrice or Bertrand. It has also been noted that it's somewhat suspicious that the Baudelaire parents sent their children off to the beach the day of the fire; perhaps they knew what was coming and wanted to protect their kids. But if they knew what was coming, they could have also developed a plan for at least one of them to get away. Warning: book spoilers ahead!

Then again, Jacques' statement might not be about the Baudelaire fire at all, especially because there was one unexpected survivor of the Quagmire fire in the books. Though Isadora and Duncan's parents died, their brother Quigley managed to get away through their own secret passageway. When the fire broke out, his mother hid him under a trapdoor that led Quigley to a tunnel, which in turn led him to the house of Dr. Montgomery Montgomery. It was there that Quigley crossed paths with Jacques Snicket and learned all about the V.F.D.

Quigley reappeared later in the book series, though he has yet to appear in Season 2 of the Netflix show. He can be spotted in the finale of Season 1 right before the fire broke out at the Quagmires' home, though that scene gave no hint about his potential survival. Still, the fact is that Quigley is a known survivor in the books and one who met up with Jacques Snicket at some point, too. It seems fair to assume that Jacques' debriefing interview does refer to Quigley after all.

But neither the show nor the original series has confirmed who the possible survivor is, making all of these theories nothing but speculation. Until confirmation occurs, the question of who survived the fire joins the other unanswered mysteries in A Series of Unfortunate Events.