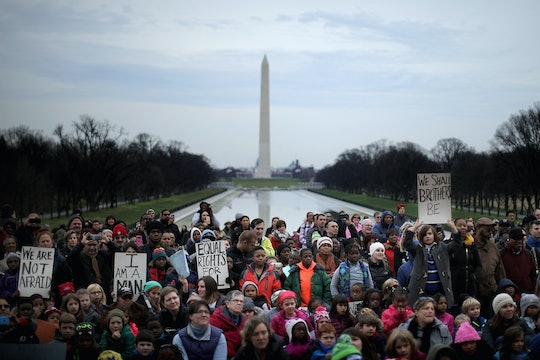 Your Legal Lifeline At The Women's March

The inauguration of President-elect Donald Trump is only a few days away, which means The Women's March on Washington isn't far behind. What started as a small movement on social media after Trump's election in November, has evolved into what is expected to be one of the largest organized protests in American history. While the Women's March on Washington is set to be a peaceful demonstration, it's always wise to be fully prepared for any situation. The organizers leading the movement are working with law enforcement to ensure everything is safe and legal, however, you should know who to contact in D.C. if you need legal assistance during, before, or after the march.

On the website for the Women's March on Washington, the organizers are clear that they do not anticipate that there will be any arrests during the march. Despite this, though, they want everybody participating to feel safe and prepared. Their website states that they are "in the process of setting up a legal hotline for marchers who are detained or arrested, or for family and friends inquiring on behalf of someone who has been arrested." The hotline isn't finished being set up yet, but participants can check back in the days leading up to the march to find the phone number.

While the leaders of the march state that they "expect all marchers to abide by all laws and any instruction of law enforcement" and are "planning a peaceful demonstration," The Guardian estimates that hundreds of thousands of people will participate in the march. A march of this magnitude, as good as it's intentions may be, is likely to experience some hiccups. Mass political protests such as this have had legal disturbances in the past, so make sure to check back to the Women's March on Washington's website to get the legal hotline number before heading down to D.C. on the 21st.

The Women's March on Washington will take place on Saturday, Jan. 21, one day after President-elect Trump is sworn into office, so it's important to get prepped now.

As angry as his presidency may make you, it's important that you take the high road in Washington, D.C. by participating in the meaningful, progressive, non-violent protest on Saturday. Regardless, you should probably have all the important info ahead of time — just in case.

More Like This
This Free Website Connects Parents Who Need Formula With Those Who Have It
Operation Fly Formula Begins With 78,000 Pounds Of Baby Formula
What Is Monkeypox & Should You Be Worried? Here’s What You Need To Know
Chris Pratt & Katherine Schwarzenegger Welcomed A Baby Girl With The Prettiest Name