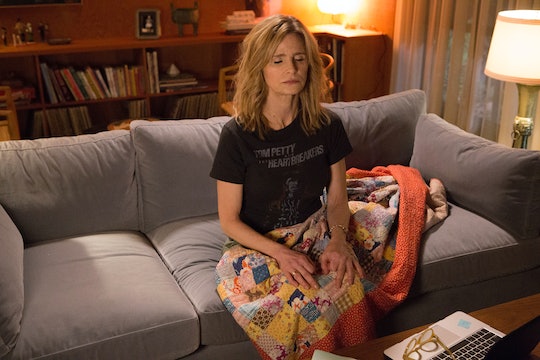 In the ABC series Ten Days in the Valley, television producer Jane Sadler's daughter Lake goes missing suddenly in the middle of the night while Jane is working in a shed on her property, less than 12 feet from her home. She assumed Lake had been safely sleeping in the house, but when Jane returned, her daughter was gone. So who took Lake on Ten Days in the Valley? That's the very question the 10-episode series plans to answer, but it can't give up the solution right away. The show is a mystery, after all, so it may take time before what happened that night becomes clear.

But even though it's difficult to predict who kidnapped Lake, that doesn't mean there aren't plenty of suspects. The promo for the series raises more than a few possibilities. When introducing the people who surround Jane, it seems like there are several characters with access to the house who might also have a motive to hurt Jane or Lake. Then there's a twist in the final moments of the trailer where a video of Lake makes it seem like she's not actually in any danger at all. Without more information, it's hard to tell what turns the story will take, but Ten Days in the Valley is sure to be full of unexpected twists.

Detective Bird, who is handling Jane's case, warned her that she had no idea who she could really trust. The idea that anyone could have betrayed Jane by taking her daughter means that the threat could be hiding in plain sight, and it's even harder to pin down who's responsible. The house wasn't broken into, so it would have to be someone who had a key. The trailer quickly goes through everyone who could be involved: Jane's co-writers at work, the source she's getting material from for the show, her sister Ali, her nanny, her assistant, and her (potentially volatile) ex-husband Pete.

Pete is a promising lead, because he doesn't seem to have the greatest relationship with Jane. She says that he's not supposed to have a key to her house, though it's possible Lake might have given her key to him at some point. A video sent to Jane at the end of the trailer shows Lake happily swinging on a tire swing and totally fine, and if her father was kidnapping her for custody reasons then he probably wouldn't hurt her. He's also having an affair with someone close to Jane, so he's all kinds of shady.

But the issue could be coming from the professional side of Jane's life rather than the personal. Jane works on a cop show that presumably explores all kinds of crimes, but she's getting her material from a real person, Gus who is beginning to fear the possibility of exposure. If Gus' situation is that dangerous, then Jane could tangentially be in danger as well. Either the people Gus fears could be after her, or Gus himself could be trying to get Jane off his back by giving her something else to focus on. It's drastic, but possible.

However, those are very typical guesses gleaned from a two-minute promo intended to confuse viewers and make them curious about what happens next. The real perpetrator might not even be featured in the promo at all. It might be someone whose motives have yet to be revealed. Jane is supposed to be a flawed character and she might have enemies the audience is unaware of. Detective Bird was right when he said no one could be trusted.

But that's part of what makes the mystery of the show so compelling. If anyone could have done it, then Ten Days in the Valley will be able to keep the audience guessing and interested all season long.