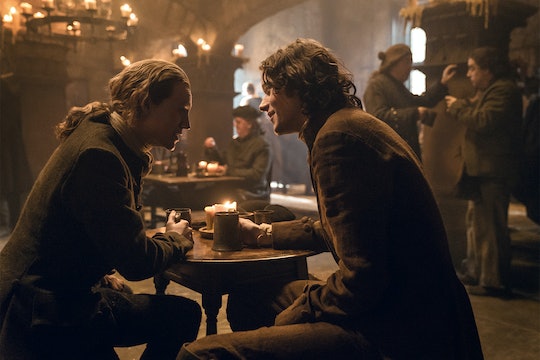 Young Ian Is In Serious Danger On 'Outlander'

I know this might be a bit surprising to you, but so far the plots on Outlander have been pretty tame. It is in the third installment of the series that the action really kicks into full gear, starting with Ian's kidnapping. So who took Young Ian on Outlander? His captors are taking him across the Atlantic, with Jamie and Claire obviously hot on their heels. They don't know who took him or why, but they are going to try their hardest to find out. Being a book fan myself, I am here to provide some insight into what's about to happen next. With only five episodes left of the season, Outlander has a ton of ground left to cover if they are going to follow the progression of the books. Warning: book spoilers ahoy!

In an attempt to recover the buried treasure Jamie uncovered on the silkie island (which they need in order to pay Laoghaire's alimony), Young Ian is kidnapped by a group of unidentifiable men and carried off to their waiting ship while Claire and Jamie look on in horror, helpless, from a nearby cliff. Their number one priority now is rescuing Ian. And in order to do that they need to figure out who has him and where they're taking him. The question of why must be left for later — though this will definitely come up, and re-introduce a character thought long dead.

Because the men who took Ian were coming to that particular island, Claire and Jamie very astutely guess that they were coming for the buried treasure themselves. But who they are and what they were doing with it remains a mystery. Their only real move is to go to France to see the ever-helpful Jared, Jamie's cousin introduced in Season 2. Dealing as he does with cargo ships, their hope is that he will be able to help them identify the ship that is carrying Ian and provide them with a way of going after him.

In the books, because so few ships leave at that time of the season, Jared makes an educated guess that the ship that took Ian was the Bruja, headed towards Jamaica. Once there, they hear of a wealthy widowed plantation owner named Mrs. Abernathy who turns out to be none other than supposedly deceased witch Geillis Duncan. Yep, she is the one who has Ian now. You didn't really think she was gone for good now, did you?

As the only other character in the 18th century who has traveled through the stones, she's a great foil for Claire. While Claire's journeys through the stones are always motivated by love, Geillie's own experience with time travel is much darker. She believed that a blood sacrifice was necessary, and has no problem with murder if she thinks it will serve her purpose.

And it happens that she is far, far more twisted than anyone realized. Not only has Geillie at this point murdered at least five husbands, her research into the magical mechanics of time travel has taken an even creepier turn. For whatever reason, she has decided that she needs to sacrifice virgin boys to find a certain stone, which is why Ian has been taken to her. But because, as we all saw in Edinburgh, Ian is not a virgin, his life is spared.

If you've been paying attention, you'll now remember a rather odd scene from the beginning of the series when Claire is still a 20th century doctor in Boston. Her buddy Joe Abernathy asked her for help examining the 200-year-old remains of a murdered white lady about Claire's age. Well, let me just say you're probably going to see exactly what happened to that lady in Jamaica.